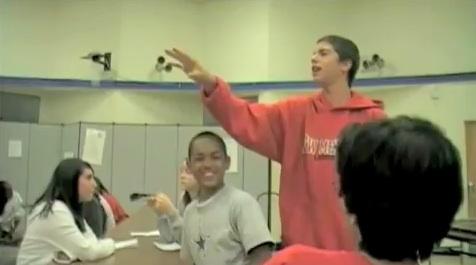 “You’re under arrest,” Lucas said. “Did I say that right?” the seventh grade Peacekeeper whispered over his shoulder to a group of students standing behind him. They nodded.

“What? Why? You can’t arrest me,” the mayor cried. “I didn’t do anything!” Her face twisted into a frown. “What is going on?”

The commotion soon caught the attention of the entire Micro gathering at Grant Middle School.

“You’re under arrest because people didn’t receive the raises you promised them. They said there’s money missing,” Lucas continued.

“It’s not missing – and you don’t have

the power to arrest me!” the mayor argued. But it was too late. Before she could explain the situation, a group of seventh and eighth graders began to make an announcement to the crowd.

“We are the Cobra Party,” one of the Peacekeepers said. “And we are replacing the mayor with our own emperor, Rene.”

“What’s all this about?” Mr. Watts called out as he made his way to the front of the room.

“Where’s our money? Why aren’t people getting paid what they deserve?” Lucas interrogated the mayor, a tall and imposing 13-year old girl who had taken office 2 months before.

“If you have issues, we can discuss them at the next council meeting. You can’t just arrest me and take over! That’s not how it works. Mr. Watts?”

“This sounds like a heated issue, Lucas,” Mr.Watts said calmly. “Peacekeepers, is it your intention to overthrow the regime?”

Lucas nodded. “High Council. We want to be called the High Council now. Can we make an announcement?”

Lucas and Rene stood at the front of the room. “There will be one party,” Rene started, “called the Cobra Party.”

The room was buzzing with gasps and whispers. “Can they do that?” one student shouted.

Rene continued, “You can choose whether or not to join the party, but there will be benefits.”

And just like that, the government of Grant Middle School MicroSociety was overthrown. The following week, a group of concerned students gathered in the library.

“How can they arrest the mayor?” Matthew questioned.

“Well, it doesn’t matter, because it’s done and now the Cobras are running everything, telling us all what to do and taking all of our money for weird taxes,” Kira said matter-of-factly. “So what now?”

“What if we form our own party?” Matthew asked.

Kira looked up from the notebook she was scribbling on. “Yes! If they’re the Cobra Party, we should be…”

Matthew and Kira led the group as they strategized how to overrun the new regime. The discussion grew louder and louder as they all shared their opinions.

“Guys,” Matthew said in a hushed voice. “We have to be quiet – the Mongoose Party has to be a secret until we’re ready to unveil our plan.”

Two days later, they were ready. Lucas stood face-to-face with a poster that had been neatly hung in the main hallway. “What is this?” he asked Rene, pointing to a picture of a mongoose devouring a cobra.

By lunchtime the next day, word was out and the school was divided.

“The Cobra party has your back!”

Mr. Watts stepped up to the microphone in the cafeteria. “There will be a tournament,” he announced. “And the winner will become the new government of Grant MicroSociety.”

Matthew, Kira, Lucas and Rene looked at each other, each fiercely determined.