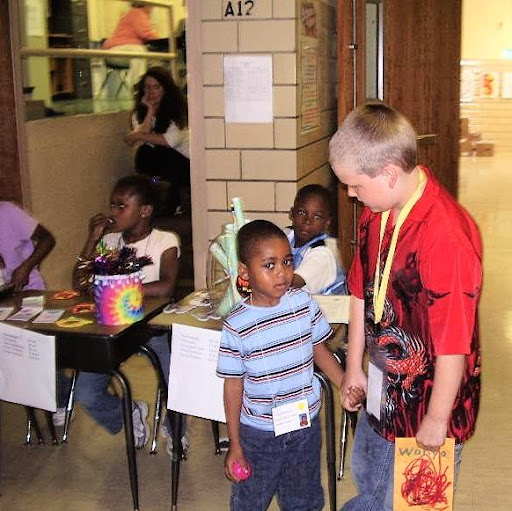 “Taxi! Anyone need a taxi? We’ll take you anywhere you need to go!” Anabelle shouted in the crowded hallway before school started.

“Are you new here? Where are you headed?” she leaned down to talk to a first grader who looked lost.

He glanced down at the sheet of paper in front of him, and then back up at the fifth grader. “Ms. Smart, Room 153.”

“Got it,” Anabelle said, offering her outstretched hand. “I’m from the Taxi Service – usually it costs 3 Micro Bucks per taxi trip, but I’ll give you this first one for free. Here’s a map,” she handed him a rolled up piece of paper tied with a ribbon.

He nodded and followed her to Ms. Smart’s room.

At the next company-wide meeting for the Taxi Service, several employees were concerned.

“I haven’t gotten any customers this week,” one fourth grader complained.

“Now that we’ve been in school for a few weeks, the kindergartners and first graders aren’t asking for our help anymore,” another employee agreed.

“I just helped a first grader today,” Anabelle argued, neglecting to mention she didn’t actually make any money from the service.

“We’ve sold 56 maps since school started,” the company’s manager DJ pointed out while waving a rolled up paper in the air. “It was a good way to make money, but no wonder everybody knows their way around.”

“I like helping people,” Anabelle said. “But DJ has a good point. Soon, everyone is going to know their way around and nobody will need a taxi. What should we do?”

DJ put his hand to his chin and thought hard. “We need to work together to figure out an answer.”

“Brainstorming!” Anabelle blurted out. “I bet we can all come up with something.”

Over the next twenty-five minutes, the nine Taxi Service employees talked, discussed, disagreed and even laughed.

DJ looked over the sheet of paper they’d been scribbling and sketching on. “OK, I think we’ve got something here. We’ve agreed that we’re really good at making maps – and since we’re not sure what to do with them, we’re going to make a survey to ask the students what they think.”

Not everyone was convinced. “I still don’t know if it’ll work,” the fourth grader stated. “What if it doesn’t give us any ideas?”

“Well, we’ll just have to see,” DJ said. “Trust me, we’re not going out of business. We’ll do whatever it takes, no matter what.”

A few days later, Anabelle stood at the same spot in the hallway where she usually tried to get taxi jobs. Today, she was asking a different question.

“Do you have a minute to take a survey?”

At the end of the day, Anabelle was excited to share the opinions she gathered.

The nine employees gathered around the table again, rifling through the surveys and brainstorming once again.

“Well, it looks like everyone really likes our maps, which is good,” DJ said. “And we got a lot of interesting suggestions,” he continued. “But this one…” he grabbed one sheet of paper.

“One third grader asked us if we could make a map of the entire United States, with the state capitals labeled.”

“Exactly. I guess he has a test coming up, and he thought it would help.”

The fourth grader’s eyes lit up. “Our class is studying Europe. We could make a map for that, too.”

“Why don’t we find out the Geography standards for every grade – then we can create maps and study sheets for everyone in the school!” Anabelle said excitedly. “I know my friends would pay for that!”

“It’s a great idea. But why didn’t we think of it earlier?” the fourth grader wondered aloud. “I feel like we should’ve been able – “

Anabelle interrupted her co-worker in a calming tone. “It’s OK,” she said. “My mom says that everyone has to ask for directions sometimes.”