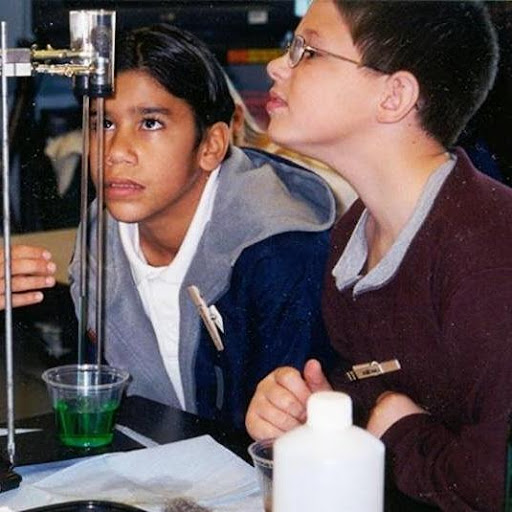 As he donned his goggles and lab coat, Gunnar glanced around the room at the tables filled with beakers, jars and various tools. He was so excited to be chosen for the opportunity to become a Young Scientist, learning from the professors who visited from the local university.

“Today, we’re going to learn how to make a mirror,” the professor explained as Gunnar began to furiously take notes. He was in charge of recording each experiment so the Young Scientists could demonstrate it for their classmates the next day during the marketplace.

“This is so much fun,” Gunnar’s friend Maria whispered as she mixed together the substances they were using for their project.

Gunnar nodded as he snapped a few photos of Maria’s mirror experiment. “I think everyone is going to like this one at the marketplace. But I think it’d be way more fun if they got to make the mirrors, too!”

Maria paused for a second to think. “And they could keep them afterwards….” She trailed off, tapping the mixing spoon on the table.

“Do you really think we could do that?” Gunnar’s eyes widened. “I know some people watch our demonstrations,” he said as he fidgeted with the sleeve of his lab coat. “But imagine if they could actually be up here, in goggles and a coat, doing what we’re doing now! They’d feel like real scientists, too.”

Immediately after the demonstration was done, Maria bounded up to the front of the room and tapped their advisor on the shoulder.

“We have an idea,” she said, motioning to Gunnar.

He stepped forward. “What if instead of just showing everyone how to do this mirror experiment tomorrow, we let them do it along with us?”

One of the professors overheard their discussion and voiced his opinion. “I think that’s a great idea, and a great way to get more students excited about science! I think you should experiment with your new idea.”

Their advisor agreed, so Gunnar and Maria gathered up the rest of the Young Scientists and they got to work. There were many questions to be answered; together, they tackled them all.

“How much should we charge?”

“What if we run out of lab coats?”

“Will we have enough materials?”

“Who will demonstrate the experiment?”

After a vote, they decided to charge 10 micro bucks per student, “a very reasonable amount” in Maria’s opinion. Eva volunteered to go around the school, asking each science teacher to borrow any extra goggles and lab coats on hand. The Young Scientists also decided to limit the number of participants to 10 for the mirror experiment, based on the amount of materials they had.

“I think Gunnar and Maria should lead the experiment, since this was their idea!” Tamara said.

Not used to being the center of attention, Gunnar blushed. Maria spoke up, “Thanks, Tamara! We’d be happy to do this one, but we should rotate so everyone gets to show off their science skills!”

The next day, their advisor was stunned to see a huge crowd gathering around the Young Scientists’ table at the marketplace. Word had quickly spread, and it appeared the entire student body was vying for the 10 precious spots in that day’s experiment.

“I heard you get to actually make a mirror and take it home!”

“Right here,” Eva said as she handed the fourth grader a clipboard and pencil. “We’re all filled up for today, but we’re taking names for the next experiment – we’ll be doing three groups of 10, so there’s plenty of space!”

After the demonstration and experiment were over, the students handed over their lab coats and collected their finished mirrors.

“That was the best 10 micro bucks I ever spent,” one boy said to his friend. “I can’t wait to do it again!”

Gunnar looked at Maria. “Well, it sounds like our idea experiment was a big success.”
She held up her finished mirror and laughed. “Both experiments, you mean!”