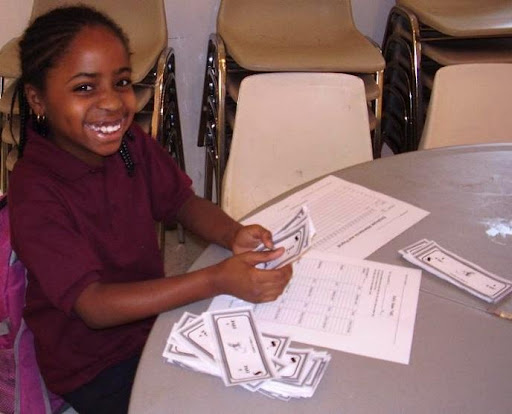 When the bank manager opened the cabinet where the Micro bucks were kept, her jaw dropped and her heart sank.

“The Micro money!” she said loudly, realizing her employees were staring. She lowered her voice as Ms. Baron rushed over. “It’s missing.”

“Are you sure? You haven’t taken it out to count-“

“I know what these stacks looked like yesterday, and four of them are gone,” Talia said curtly, then softened her tone. “Sorry, I’m just upset.”

“I understand completely,” Ms. Baron said as her face began to flush in anger. She spun around and marched toward the front of the room.

“Everyone listen up!” Ms. Baron yelled over the conversations of thirty-five fourth graders. “There’s been a bank robbery.”

The room went silent. Talia had never seen her teacher so angry. As Ms. Baron spoke, she gestured wildly. Some students began to snicker.

“You think this is funny? That was your money in the bank, and yours, and yours too,” she pointed around the room. “I’m very disappointed in whoever did this.”

Talia looked around the room. It seemed like she was the only one who shared Ms. Baron’s anger. Why would someone steal from the bank, she wondered. And why does everyone think it’s so funny?

A few days later, Talia overheard a few of her classmates, a group of four boys, bragging to their friends about their cunning scheme – it turns out they’d been watching Talia at the end of every day and knew her routine for counting the money, recording the numbers and then locking the cabinet.

In the few seconds it took her to sign the daily bank sheet, one of the boys had jammed something in the lock to prevent it from automatically sealing when she closed the door.

“No way, that’s so cool!” one boy said in response to hearing the story.

“You guys are crazy,” one girl said. “And daring!”

Talia was devastated. Someone had robbed the bank, and nobody was mad but her! She approached Ms. Baron to report about what she’d heard.

“I’m pretty sure I know who did it,” Talia said, feeling the anger melt away as her mind formulated the details of a new plan.

“That’s good news. As the bank manager, how do you think they should be punished?”

“Oh, I don’t think we should punish them,” she said.

“What?” Ms. Baron was puzzled.

Talia took a deep breath. “OK, well… it’s something I learned from my brothers. They played together a lot, but my older brother Marcus liked to steal my younger brother’s games. My younger brother eventually got so mad that he refused to play at all. Marcus had all the games but nobody to play them with. So he gave them all back.”

Ms. Baron listened intently. “That’s an interesting concept, Talia. Do you think it will work here?”

“Maybe,” Talia said. “Yelling at them didn’t work, so I figured if we did something different…” she trailed off. “It might take a while for everyone to turn on them, though.”

Ms. Baron tapped her pen on the desk several times in rapid succession. “What if we speed up the process? I think I have a plan.”

Talia smiled. “Count me in.”

The next day, Ms. Baron showed up with a box of toys and school supplies. Kids crowded around her desk to catch a glimpse of what was inside.

“What’s this for?” one boy asked as Talia smiled slyly.

“I thought it’d be fun to have an auction today,” Ms. Baron said. “Everyone gather up your money so you can bid on these fun items!”

Halfway through the auction, the four boys who robbed the bank had amassed quite a collection of brightly colored bouncy balls, crazy straws, pens and small games. Talia could sense the tension in the room as they won auction after auction by outbidding their classmates.

“I think it’s working,” she whispered to Ms. Baron.

Finally, one fourth grader spoke up. “This isn’t fair!” he cried out, pointing at the four boys and their collection of toys. “They stole money from the bank and they’re using it to buy all the prizes!”

“Yeah!” another girl yelled. “I worked hard for my money!”

“You guys are thieves!”

“All of a sudden everyone hates us,” Talia heard one of the boys whisper to another. With their actions exposed and their classmates turning on them, the boys finally realized the error of their ways.

Their ringleader spoke up. “Okay,” he said with a pained look on his face. “We’re really sorry about stealing the money. We were just trying to be cool.” He paused for a moment and looked down at the stockpile of auction items on the table in front of him.

“Here… everyone take something from our pile.”

Talia and Ms. Baron looked at each other and smiled. At the end of the auction, Ms. Baron handed Talia a stack of Micro dollars. “Put this in a safe place,” she said with a smile.

“You know I will! But something tells me we won’t have to worry about another robbery around here…”