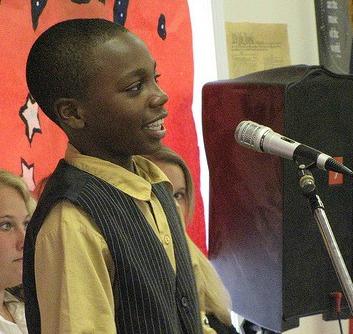 “If selected as your MicroSociety president this year, I will make this YOUR society. I will listen and hear your voices. I will make the changes that you want to see. I will leave this place better than I found it. I promise I will not let you down.”

8th grade Ben paused to take a sip of water. All this talk had made him thirsty. He almost started laughing as he pictured President Obama onstage with dry lips. Like he often had to do in class or in church, he pinched his leg to stop. Luckily, it worked.

“In looking at school records, I noticed that only 30% of you are purchasing your lunch from the cafeteria each day. That tells me that you are not satisfied with what the cafeteria is offering. I want to talk to you and find out what you want on your plates. Our cafeteria needs our support, and to get our support, it needs to satisfy you. I will make that happen.”

The citizens broke into loud applause. Some kindergartners even started cheering. Funny, they were only in school for half a day and ate their lunch at home. Interrupting their claps, Ben declared, “I take that back, WE will make it happen.” To which, whistles and cheers sounded. Exiting the stage with the confidence of a star, one would never know that Ben didn’t do his homework last year. Didn’t study. Didn’t even shower some days. Or wash his uniform before picking it up off the bedroom floor to wear again (that was before he liked girls). His only aspiration was summer vacation.

One would never know all this if his competition didn’t point it out in the debate. Quite pointedly.

“Why should anyone believe the promises you make? I certainly don’t” Rachel jabbed. “Let’s just say you didn’t exactly have the best record last year. We were in Spanish class together, and you fell asleep during one of the tests.” She turned to look at her fellow incumbent. Her dark eyes are just as sharp as her words. “You don’t seem like someone who is going to do much of anything, if you ask me.”

“You are right,” Ben replied. “I failed Spanish. I got detention for coming to school late. I didn’t really care about anything. But I’ve changed. Citizens should vote for me if they believe that people can change.”

And maybe they did. Maybe people could. But come election time, it was a landslide victory. For Rachel. As for Ben, he interviewed and was hired by the Green Thumbs as garden manager. His position involved ensuring that conditions were ripe for growing fruits and vegetables. Produce that he negotiated with cafeteria employees to incorporate into their daily menu selections. Spinach pizza. Strawberry shortcakes. Carrot bread. Zucchini squares. Seasonal. Fresh. Farm to lunch tray. And Lunch sales in the cafeteria had actually increased with the new additions.

Ben took each of his paychecks with pride and marched them right to the bank. Not to cash, but to deposit into his savings account. He had a very clear plan. To save enough for the bicycle that was being sold in the Marketplace thrift store. A big ticket item.

“You don’t have the willpower,” said Donovan. He had known Ben too long.

But he was. And he did. On the last Marketplace day of the school year, Ben presented Eva, the shop’s 2nd grade cashier, with a wad of Micros. Wide eyed, she counted. First in my 20’s. Then by 10’s. Finally by 5’s.

“And 1 Micro is your change,” she declared. “Would you like a receipt?”

Joey was wrong. Donovan was shocked. And Ben? He was the proud rider of a rightfully owned bike. Which he graciously allowed them both to test out.

Ben did not win the candidacy. Maybe next year. He won something more important. Something that didn’t come with a paycheck. Well, at least not directly. Trust.