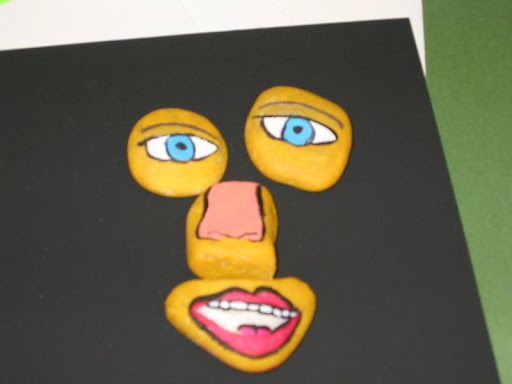 Elliott could easily name the primary, secondary, and tertiary colors. He could tell you that a mixture of any four colors would end you at brown. Shocking, he knew. But he had seen it too many times over the course of summer to doubt its truth. He had spent a good deal of his time off of school turning rocks into true gems, by covering their dull surfaces with vivid works of his imagination.

This was more than just a hobby. It was work. Elliott and 6 others were hired by three 4th grade entrepreneurs who were launching their new business, Wee Rock, at the start of the new school year. Elliott was pretty sure his art portfolio had earned him the job. The pencil sketch of Spiderman and the Joker was pretty amazing by his estimations. No pay came along with this summer work. But Elliott didn’t mind. He was promised job security come the fall. No job fair for him.

Or so he thought. Reporting to the first day of school, with a backpack that both felt like and was filled with rocks, Elliott couldn’t wait to show the others what he had accomplished. 25 paintings. Everything from superheroes to Snoopy.

“Dude, they’re really cool,” declared Nathan, one of the shop’s owners, as he carefully placed them inside a plastic bin.

“Yeah,” said Holly, another painter “I can tell you put a lot of time into yours. Mine didn’t come out nearly as good.” She held up one that was supposed to resemble Mario. Or at least that’s what Elliott guessed. He didn’t know of many other characters with mustaches.

“Look, I hate to break the news to you guys, but I don’t think we’ll be needing you for the shop after all.” Nathan nervously looked to Tate, another owner, for back-up.

“Sorry,” was Tate’s only response, hands deep in his pockets.

Elliott could feel the tears welling in his eyes. But he couldn’t…wouldn’t cry in front of them. He had given up his summer for this…pool time and all. What a waste. He didn’t even have his rocks to show for it.

The more he thought about it, the more angry he got. It wasn’t just him that was out of work and out of luck. There was Holly. And four others.

So, they went to the Better Business Bureau to file a complaint.

“Did you sign a contract, promising you pay and a job come September?” asked Willa, an 8th grader. Elliott could tell she was smart from the way she talked.

All 6 shook their heads from side to side. The thought hadn’t even crossed their minds.

“Then there is nothing I can do for you,” Willa shrugged. “But try the court. They might be able to help you get the rocks back. I mean, they are yours.”

And so they did, suing Wee Rock for the rights to their designs. The verdict? All 96 rocks were ordered to be returned to their rightful owners. Elliott and the others may not have signed a contract promising fall work, but they also did not sign away their intellectual property. They were also each granted $25 Micros in damages for the weeks spent writing their resumes and preparing for interviews when they could have been earning.

“What if we open our own business… a paint-your-own rock studio…kind of like those paint your own ceramics places?” Alan, the quietest of them all, suggested. “We all have lots of experience and samples to show.”

All 12 eyes lit up. One business plan and one loan (shared six ways) later, Rock N’ Roll was open for customers.

Elliott’s favorite part was teaching the lessons. After all, he was a natural. As for Holly, she took care of all the records and accounting. Turned out she was a natural too. Just not at that painting part. And Alan? Not only was he an entrepreneurial thinker but an expert salesman as well. As for Tate and Nathan, they found themselves paying customers at Rock N’ Roll. They still had much to learn.