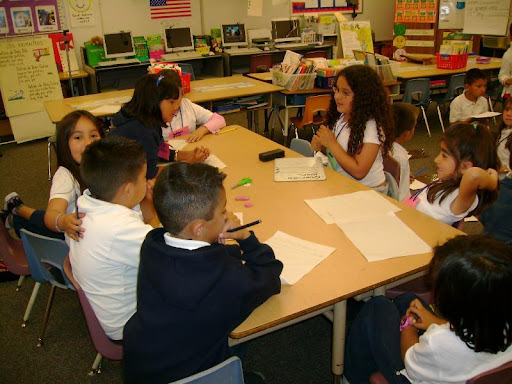 It came. The big yellow envelope was waiting in her homeroom mailbox when she arrived on Tuesday morning. Thank goodness. Hannah, halfway through the 6th grade, gingerly touched the bold markered letters on its front. Professor Hannah Zimmer. Repeating the words in a soft whisper, she couldn’t help but smile. Professional. Grown-up. Sophisticated.

“Is that your course enrollment for Micro University?” asked Andy. “I have 25 citizens signed up for mine-Korean for Me An’ You.” He declared. She just stared at the spikes in his hair. She hadn’t asked. Everyone said he had a crush on her. She just thought he was kind of irritating. Always telling her things she didn’t really want to know. They had worked together in their Philadelphia MicroSociety‘s Museum of Fine Arts. Now it appeared they would both be university faculty.With over 20 different languages native to their school’s population, M.U. decided to make the focus of the spring semester, “For the Love of Language”. They had both signed up to share their own culture and heritage.

“Well, aren’t you going to open it?” he asked. Hannah wanted to say, “Yeah, if you go away!” But she knew better than that. “Of course I am,” she uttered before walking towards her locker.

Her course was titled, Can-Do Hebrew. It didn’t take much prep time to put it together. She had already been practicing once a week to prepare for her Bat Mitzvah. It was only 1 year away. She couldn’t wait to show all of her students how to pen the Cheit and the Khaf...and the Ayin (the silent letter). They didn’t exist in the English alphabet. She was eager to show them how to read from right to left. Different from the way they had all been taught in kindergarten.

Running her index finger along the edge, Hannah tore into the contents of the yellow parcel. She scanned the hall to make sure that no one was watching as she read the enclosed letter. “Dear Prof. Zimmer,” it read. “We regret to inform you that due to low enrollment, your course will not run this spring semester. We encourage you to try again in the fall! Warm wishes, Office of the Micro University Dean.”

“Warm wishes? Baloney!” Hannah blurted out. She didn’t mean to say that out loud. Her anger was soon met by tears. Quick ones. The kind that drip off your face if you don’t wipe ’em fast enough.

Andy spotted her and came over. The last person she wanted to see. “What’s wrong Hannah Banana?” he asked.

“Nothing.” She tried as hard as she could to avoid his stare. And question. And nickname.

“If nothing was wrong, you wouldn’t be crying.” He persisted.

“Look, no one signed up for my class. You wouldn’t understand. Your class is full. Just don’t worry about it.”

Maybe he didn’t completely understand how it felt. But he wanted to help. “Hey, what if we combine our classes? The people who picked my class could learn Korean AND Hebrew.”

Through puffy eyes, Hannah looked up at him. “Hebrew and Korean are totally different.”

And so they wrote to Hillary, the 8th grade Dean. She loved their idea. And gave it her stamp of approval. Andy sent his 25 students a letter. To let them know about the change. They loved the idea as well. And in the end, all 27 walked away being able to write a gimmel and a wei.

Maybe Andy was on to something. Maybe two languages were better than learning just one. Maybe he wasn’t so bad. Maybe things…and people aren’t as different as they first seem.

Maybe it takes kids to remind us all that on this Day of Independence, we should take time to celebrate our individuality and pay homage to the gifts that lie within our diversity. May freedom ring.