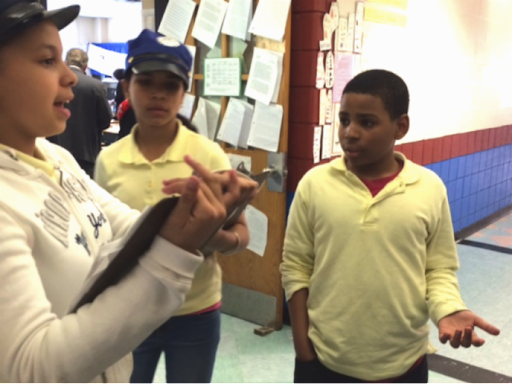 She nodded in agreement. “Two for teasing, three for running and two for…” she paused for a moment, “I think the last two were for gum.”

“Well,” he said, shuffling through a stack of papers. “We’ve only collected three fines so far. The rest are past due.”

“Again?” Destiny frowned. “When we first started writing these things, everyone was scared and paid them all right away. Now they know we can’t do anything about it if they don’t.”

“If we track them down, we can send them to court.” James said.

“IF we track them down,” Destiny clarified. “I don’t think Sam logged all of his tickets at the end of the day yesterday. And I know a few kids who got away with not paying because they gave out fake names.”

The next day, they both stood in front of Lia’s “bench,” a long cafeteria table draped with a black tablecloth.

“It’s these tickets,” James said, holding up the stack of papers. “A lot of them are past due, and we would send the kids to court but we can’t find them. We only know their first names.”

“Or their fake names,” Destiny said, rolling her eyes.

Lia nodded. “I heard a fourth grader talking at lunch today,” she recounted. “He was telling his friend not to waste 5 Micros paying his ticket because the Peacekeepers couldn’t make him pay anyway.”

Destiny scrunched her face in anger. “That’s not fair! We work hard writing these tickets to keep everyone safe. It’s not right that they won’t pay the fine for what they did.”

“Well, we all have our school cards,” the judge explained, showing an I.D. card with her picture on it.

“Duh,” Destiny muttered. “If we just ask them for the I.D. card, we can write their full names on the ticket!”

“Also… if you write everything down on two sheets of paper, you can give them one and keep one so we know who owes us and what their offense was.”

“Now we’re talking!” James said. “If we know everyone’s names and how much they owe, we can deliver a notice to their Micro mailbox right before their fine is due. And send them a notice when it’s past due, too.”

James, Lia and Destiny exchanged high fives after triumphing over the ticket dilemma. “Hopefully this works,” Destiny said. “Otherwise, you’ll be seeing a lot more kids in your courtroom.”

“I have faith,” Lia said with a smile.

The following week, Destiny stopped by the courtroom to drop off a stack of court notices. “Well, it’s working… sort of,” she said to Lia. “It turns out everyone was so used to ignoring these tickets, they didn’t take our overdue notices seriously.”

“Well, they will now,” Lia said. “Yesterday I sentenced three kids to 2 hours each of Micro service. “They couldn’t believe they were in trouble for not paying their tickets.”

Just two weeks later, Destiny stopped by again, this time just to say hello. “What’s going on here?” she called out to an almost empty room. Lia was sitting at the bench, reading her science book.

“Just doing homework,” she said. “How are the tickets going?”

“Lia, you won’t even believe it,” she said. “This week, everyone paid their tickets on time.”

Lia looked around at the empty room. “Um, I CAN believe it!” she laughed. “You guys are so good at collecting fines, I’m thinking we might not need a judge any more!”

“So, what are you gonna do instead?” Destiny asked, half joking. “You should be a politician, you’re a problem solver!”

“Well,” Lia said in a serious tone, “I hear there’s an opening for Vice President…”