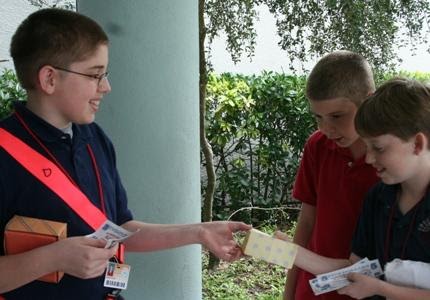 We have all heard the adage that it takes a village to raise a child, but its converse is also true. The student citizens of Scottie Land, Sageland Elementary’s MicroSociety, have proven that children have the power to raise a community, even in the midst of tragedy. When the Scottieland MicroSociety Executive Board, composed of one fifth grader and four sixth graders, received the news on January 16th that a fire had severely damaged the home of one of their peers, they knew they needed to rise to the occasion and provide aid.

In collaboration with the venture and agency presidents in their student-created society, the Board brainstormed ideas and arrived at a plan to bring relief to those impacted by the tragic events. By hosting a fundraiser, citizens of Scottieland hoped to help ease the financial burden of making repairs to the substantially damaged  home.

“We felt really bad, and we wanted to help him. That’s what it means to be part of a community,” remarked Brian Aguilar, 6th grade President of the Executive Board.

The Executive Board and Presidents’ Collaborative broke into smaller task forces and assumed responsibility for directing publicity. Each morning brought a different announcement over the intercom, every wall inside the school was plastered with an informational poster and every backpack held a flyer encouraging student participation in the effort. A crew of staff and student citizens was assembled to assist with on-site clean-up and painting. And their hard work paid off, as evidenced by the $1,704.10 raised within a one-week span. In the coming days, Sageland faculty and staff will continue to collect household supplies to further assist the family while they rebuild.

“I’m amazed by all the Scotties who put their hearts into the project. They really showed that they cared,” said Isabelle Garcia, 5th grade Sergeant-at-Arms of the Sageland MicroSociety Executive Board.

It didn’t take long for the relief campaign to “go viral,” in the words of the school’s MicroSociety coordinator, Cristina Castañares-Sànchez. When one Scottieland citizen told his mother, Amber Moya, an employee at First National Bank, about the situation, she encouraged him to reach out to First National Bank employees. He followed through, garnering an additional $275 and an abundance of household necessities for donation.

This HEART Project, a capstone of the MicroSociety model, was just one of the many that the Sageland Scotties have coordinated throughout the school year to bring awareness to causes within their community and around the world.