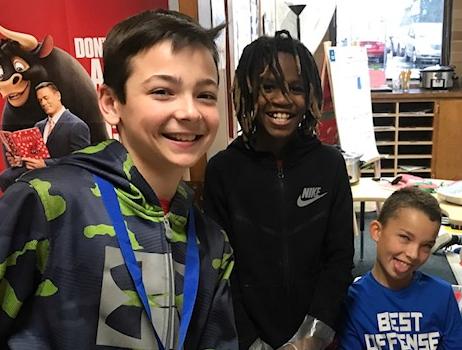 “It’s happening. I’m opening a movie theater!” Ben exclaimed, ecstatic that his business plan had finally been approved. His friends were almost as excited as he was, rattling off well wishes and ideas for his new business.
“Whoa, so cool!”
“I can’t wait to come to a movie!”
“You can partner with us at the café to sell snacks!”
But the last comment was more of a plea, coming from his best friend Noah. “I need a new job! Can I work there for you?”
In his excitement, Ben didn’t even hesitate before high-fiving his friend. “Of course! That would be awesome.”
Two weeks later, Ben was ready to start filling positions at the theater, and was going over the process with his facilitator, Mrs. Flores.
After going through his business plan and calculating his needs and resources, Ben decided he would be able to hire four people to help him run the movie theater, with the hopes that his success would allow him to expand to six by the end of the year.
“I promised Noah I’d hire him, so that’s one less position I need to fill.”
“Oh, Ben… I know you’re friends, but I wouldn’t recommend hiring anyone without having them interview. Treat everyone the same and give them all a fair chance.”
Ben was slightly taken aback by Mrs. Flores’ advice. “But, he said he really needed a new job. And I’ve known him since the second grade.”
“He might be the right one for the job,” she explained. “But if he’s not, you could be hurting your business. And being his boss might be awkward.”
Ben listened intently to his facilitator. “Well, okay, that makes sense. But with four open jobs, I’m sure he’s got to be qualified for one of them.”
It was awkward enough telling Noah he had to apply and interview like everyone else.
“I thought you said I could have a job,” he’d said, confused. “You said it would be awesome to work together.”
“I’m sorry, I guess I shouldn’t have said that,” Ben replied. He explain
ed what Mrs. Flores had told him, about giving everyone a fair chance.
Ben was nervous about judging the answers of one of his best friends. Please, just let him be really good at cashiering, or ushering, or even thinking of creative ideas to get more business.
To Ben’s surprise, 20 students had turned in applications to fill the four positions, including Noah.
“This is going to be a tough decision,” he lamented to himself on the day of the interviews.
It was a tough decision indeed. Several of the applicants had previously worked as bank tellers and waiters, obvious choices for the cashier and usher positions. And it was hard to pass up the fifth grader who had a family tradition of going to the movies every Saturday – he knew so much about movies, concessions and how to get people in the theater!
The last position was supposed to be someone who could eventually transition into an assistant manager, helping Ben oversee employees, finances and partnerships with other ventures. The decision was down to Noah and another fourth grader who had experiencing managing employees at the post office.
“This is really hard,” Ben complained to Mrs. Flores. “I don’t know what to do.”
“If Noah wasn’t your friend, and if you hadn’t promised him a job, would you hire him?” Mrs. Flores asked.
Ben thought for a moment and shook his head. “Probably not,” he admitted. “The other candidate, Luis, has more experience.”
“There’s your answer,” she said. “I know it’s a hard choice, but you’re making the right one for your new business. If Noah is a good friend and wants you to succeed, he’ll eventually understand.”
Ben nodded in agreement. He had an idea about how he could let his friend down gently.
When he pulled Noah aside the next day, he could tell the news wasn’t good”I didn’t get the job, did I?” He asked, point blank.
“It was a really hard decision,” Ben explained softly. “You’re a good candidate, I just had to go with someone who had more specific experience.”
Noah dropped his head and nodded.
“But I talked to Cecilia at the café, and we agreed you’d be perfect for the job opening they have. And who knows, Cecilia might want to open a small café stand at the theater, so we could end up working together after all.”
Noah smiled. “Thanks Ben, that sounds really good.”
“And here,” Ben handed Noah an envelope.
“What’s this?”
“Four free movie tickets,” he said with a smile. “You earned them!”