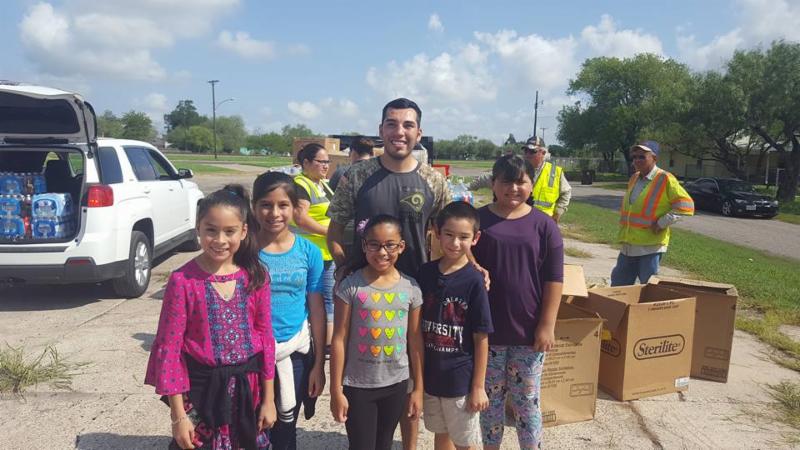 When the winds died down and the rain finally stopped falling, the fourth grade mayor of Kleberg Elementary in Kingsville, Texas was grateful that her town – and her school – were spared from the worst. But their neighbors to the north weren’t nearly as lucky.

When she returned to school, Mayor Yoltzin Bruce knew she needed to take action. “It’s not enough to send our well wishes,” she explained to the Micro coordinator, Mrs. Juarez. “We need to do something to HELP them!”

Mrs. Juarez agreed. “What did you have in mind?”

They sat at a table in the empty cafeteria, contemplating their options.

After they both tossed out a few ideas, Yoltzin became quiet for a moment and then spoke. “I think we should host a run,” she said, nodding her head at her own suggestion. “A run will help us raise the most money.”

“I think it’s a great idea,” Mrs. Juarez said, encouraging the young politician. “But hosting a run is going to be a lot of work. And we’ll obviously need Mrs. Herrera’s approval first.”

“No problem,” Mayor Yoltzin said confidently. “Principal Herrera will definitely be on board.”

The principal agreed to meet over a working breakfast. Yoltzin picked at her waffle as she pitched her idea confidently. “My mom organized a few events for breast cancer awareness and we’ve talked about all the things that need to be done. She told me to get as many people and businesses in Kingsville involved as possible. So some of the kids in the legislature have already talked to their parents and their businesses are going to donate food and prizes for the runners.”

Principal Herrera shot Mrs. Juarez a look of pleasant surprise. “Mayor Yoltzin, I’m so impressed with all the thought you’ve put into this so far. What can I do to help?”

“I need district support,” she stated, suddenly sounding like a grown-up politician. “Can you talk to Superintendent Perez?”

“Absolutely,” the principal agreed and quickly jotted down some notes. “So which school are we helping – and what are we calling this?”

“Good questions,” she said. She knew there was a lot more work to be done.

First things first, she searched online to read about towns and schools impacted by Hurricane Harvey. Kieberger Elementary seemed so much like Kleberg, she felt compelled to choose them.

As for the name, the group of legislators, venture owners and managers Mayor chose to help her organize the event had come up with MEMA: MicroSociety Emergency Management Agency.

After weeks of planning and preparing, the day had finally arrived, complete with the irony of rainy, windy weather. Though she had pitched, networked and spoken to so many people to make her idea a reality, Mayor Yoltzin was still a bit nervous to address all the runners, families, city officials and the unexpectedly large number Kingsville residents who had turned out for the big event.

She had prepared cards, but the rain had soaked her handwriting beyond recognition. She decided to speak from the heart, talking about how grateful she was to be surrounded by a community of so many helpful people, and that she hoped that if Kingsville ever needed help, she knew that neighboring towns would pitch in just as they had.

The event was a success, save for some dollar donations had sadly gotten lost in the fierce wind. She and her fellow MEMA colleagues took the money to the city bank and left with a check which they proudly delivered in person to the administrators and students at Kieberger Elementary. Their newfound friends pledged to use the money to buy new carpets for kindergarten classes.

Mayor Yoltzin Bruce walked out of Kieberger Elementary, beaming with positivity about what they had all accomplished together. But there was one small detail she would change…

“Next time we will use our own micro bank to track the donation money,” she said to her mom as they got to their car, ready for the drive back to Kingsville. “They would not have lost one single dollar, even in a storm.”