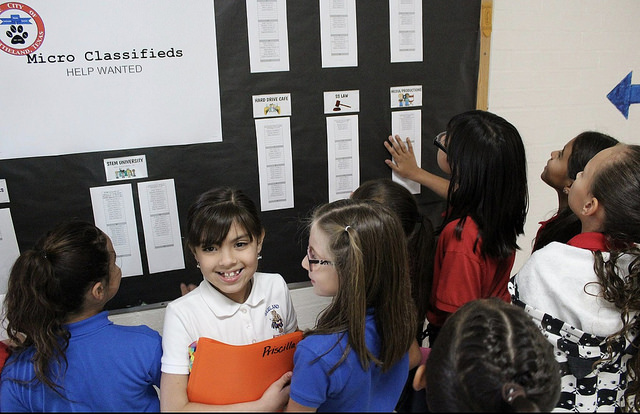 The ballots were counted. It was a tight race, but there was officially a new mayor at Dalton Intermediate School. Abby sat nervously in the library, awaiting the results.
“Congratulations!” her friend Hunter bounded in the door with the good news.
“Wait, what?” she said in disbelief. “I won?”
“Now the real fun begins,” Mrs. Dee said, walking in behind Hunter. “You have a lot of government positions to fill, a lot of people help this run smoothly.”
“You mean I don’t have to do everything myself?” Abby laughed and breathed a sigh of relief.
Two weeks later, however, Abby was thinking back to the joke she’d made on election day.
“I might actually have to do everything myself,” she complained to Hunter. “There’s just not enough kids. And everyone already has a job at one of the cool businesses. A bunch of kids wanted to be mayor, but nobody wants to do anything else. Not one person came to my job fair.”
Hunter sat with his hand on his chin, thinking.
“Well, I could probably do one less day at the movie theater,” he said. “And then I could help you.”
“Would you really do that? Would you work two jobs?” Abby asked.
Hunter shrugged. “Sure, why not?”
“Do you think… other people would do that, too?” Abby’s eyes lit up. “Maybe they think they can’t do both, and that’s why they didn’t apply.”Suddenly, they were scheming.
Hunter went to his manager at the movie theater, who agreed to give him Wednesdays off so he could take over treasurer duties, which came easily to him as seventh grade math whiz. They explained their plan to Mrs. Dee, who thought their solution was thoughtful and creative. “I think this is a great way to get lots of different people involved.”
They then spoke to the owners of all the other ventures, who unanimously
agreed to stagger their employees’ schedules so they could work elsewhere, if they wanted to.
Abby was hanging up a poster in the library about the second job fair, telling every kid who walked by that they could, in fact, work a second job if they wanted to – and there were plenty of exciting ones open in government. The manager of the bank, Ana, approached her.
“We’re having a similar problem,” Ana said. “We can’t fill these open positions at the bank and we think it’s because everyone already has another job.”
“Well, let’s get in on this campaign together,” Abby said. “Maybe some kids will want a second job at the bank, and others will want a government job.”They shook hands.
On the day of the job fair, Abby was nervous. What if nobody showed up again? She had so much work to do, and desperately needed help. She knew she couldn’t force anyone to work two jobs, but she hoped others wanted to get involved.
Suddenly, Hunter walked in, followed by a throng of sixth, seventh and eighth graders, who rushed to both Abby and Ana’s side to see what jobs were available.
“Thank you,” Ana mouthed to Abby right before they were both surrounded by classmates.
Abby smiled and turned to the crowd in front of her. “Alright – let’s get to work, guys!”