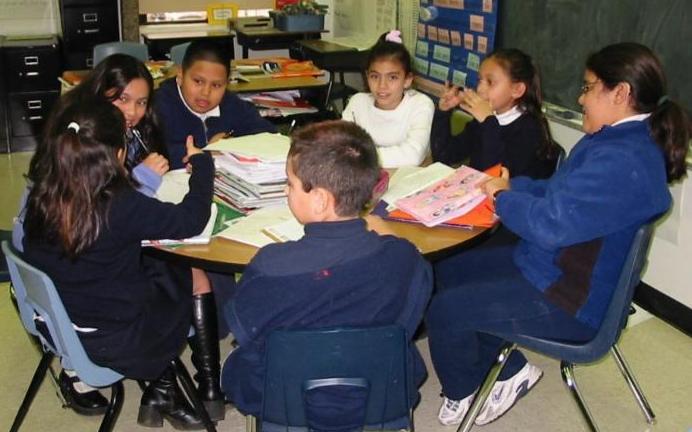 “We need more customers,” Luis lamented, leaning his chin on his hand. “Why doesn’t anyone want to come and dance?”

The Exercise Studio was slower than usual that week, and as the new manager, Luis was nervous it would reflect poorly on his own performance.

“We need to do something to get everyone’s attention,” his co-worker Callie commented.

“Hmmm,” Luis said out loud, thinking hard. “I don’t have any ideas right now. But we could call a company meeting – maybe someone else can think of something creative!”

Luis was a little nervous to lead his first company meeting. But he was also sure that together, they could come up with a good solution to the slow business problem. He had recently learned that managers don’t always have to have all the answers – that it was more important to motivate and inspire his employees to come up with answers themselves. He hoped he’d be able to do just that.

“OK guys, quiet… quiet,” Luis said to the group of 15 Exercise Studio employees who had gathered in the library for the meeting.

“What’s going on, are we going out of business?” a loud fourth grader asked.

“Wait, do I have to find a new job?” another questioned.

“Well, we never have any customers, so…”

“Hey, no way!” Luis said, trying to keep his employees calm by forcing a smile. “We are not going out of business. In fact, we’re gonna get more business than ever!”

“Well, that’s just it,” he said, hoping everyone would respond positively to what he was about to say. “I want to hear your ideas for how we can get more people to come!”

Luis wrote the idea in his notebook. “What kind of music do you think we should play?” he asked.

“Hip hop. Better hip hop,” he said with a smile.

“Great idea. Any others?”

“We should do something crazy so people will talk about us,” Callie offered.

“With an awesome dance!”

“Everyone will talk about us then!”

“And they’ll wanna learn the dance, too!”

Luis was furiously scribbling and struggling to keep up with the ideas that were coming in.

“I love this idea,” Luis proclaimed. “We are definitely doing a flash mob.”

“We should get Mrs. Vazquez to film it.”

“Then we could make a commercial out of it!”

Luis was suddenly filled with an immense amount of pride. His employees had come up with a great idea to hopefully save the business. Now…. How in the world was he going to coordinate this?

“I have an idea for the dance,” one usually quiet fourth grader said. “We should do the whip and nae nae.”

“Yes! We HAVE to do that!” the group agreed unanimously.

Over the next few days, the group got together and practiced their choreographed dance, each anxious to perform it that Friday at the end of lunch.

Finally, the day of the flash mob arrived. Luis was more nervous than ever. It would certainly get everyone’s attention, but would it work?

As everyone was finishing their sandwiches and snacks, the music started – softly at first, but gradually growing louder. The employees of Exercise Studio, who were scattered throughout the cafeteria, suddenly jumped up and bounded to the front of the room.

“Watch me whip… now watch me nae nae…” the music was loud now, and all the kids were cheering for their classmates who were inexplicably dancing in unison. One ran up and joined them, then another. And another. Soon, dozens and dozens of non-employees were dancing, too!

Luis was having so much fun he almost forgot what to do when the music stopped. He stepped forward.

“Exercise Studio would like to invite you to join us at the next marketplace. We have tons of fun classes and we love to dance!”

The room erupted in applause and cheers as the employees took a bow and handed out flyers with information about Exercise Studio.

At the next marketplace, the long line to sign up for Exercise Studio classes was an obvious sign that their plan had worked.

“So I guess nobody’s looking for a new job now,” Callie laughed.

“No way!” Luis said. “In fact, we might need to hire some new people!”