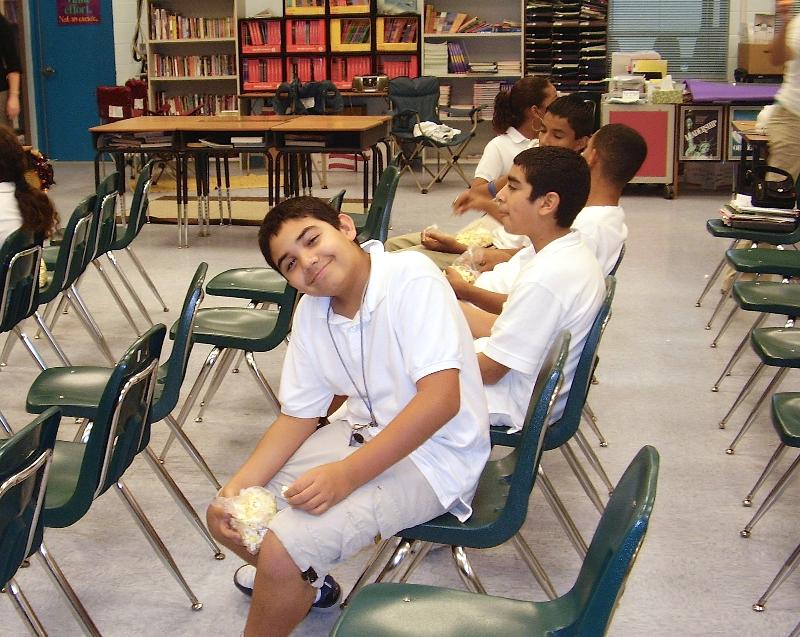 Bryan sighed as Mrs. Brown placed the paper on his desk. As he glanced up, he saw a big scribble at the top in his teacher’s favorite purple pen. He read it aloud quietly:

His friend Gunnar leaned over to tease him. “Uh oh, you’re in trouuuble.”

Bryan just shrugged. “Whatever,” he said. “I didn’t care about this test, anyway.”

As he reluctantly approached Mrs. Brown’s desk, she looked up from the pile of papers she was grading and pointed to the chair next to her.

“Come sit for a minute.”

“Am I in trouble?” he questioned.

“Well, to be honest, I’m disappointed with your work in my class lately. But I know you’re a smart kid. Why didn’t you study for this test?”

“I was going to,” he explained. “But then my brother and I had a movie marathon. We watched 8 movies in one weekend.”

“Eight movies?” Mrs. Brown was stunned. “I didn’t know you were such a movie buff. Have you been to the Micro Movie Theater here at school?”

“Yeah. It’s OK. but kids are always talking, so I can’t hear what’s going on. I’d rather watch movies at home.”

As they sat and talked, Mrs. Brown learned that Bryan had dreams to write and direct his own movie someday. To make up for the low grade he received on his test, she gave him an extra English assignment — write about the plot of his favorite movie.

He grabbed his notebook and bounded to the cafeteria, where he worked as an auditor for the Eagle Micro Bank. He hated numbers, but it was the last job available and he managed to work just hard enough to pay the rent on his desk.

It was a slow day at the bank, so he eagerly got to work on his English assignment. He was so engrossed in his paper that he almost didn’t notice the flyer as his classmate Kasey tossed it on his desk.

“Are you manager material?” she said, trying to get his attention.

“What?” Bryan looked up, confused.

“Tyler’s family moved to California,” she explained. “So we’re looking for a new manager at the movie theater. Let me know if you know anyone who’s interested.”

The next day, Bryan arrived in the classroom a few minutes early. “Can you look at my resume?” he asked Mrs. Brown. “I’m applying to be the manager of the movie theater. I also wrote out some ideas I have to make the theater better.”

Mrs. Brown was both surprised and impressed by Bryan’s enthusiasm. She marked a few misspellings and wished him luck for his interview.

As he stood in front of the panel of employees during lunch hour, Bryan explained his passion for movies and his ideas for improving attendance at the theater. “We should team up with other businesses,” he said, “and let them sell their food and crafts during intermission. We should also do something to stop people from sneaking in…”

They were so swayed by his passion, they decided to hire him on the spot. Bryan couldn’t believe it. As he was walking out, he bumped into his friend Gunnar.

“I’ve never seen you so happy, are you going home early today?” he joked.

“I’m a manager now, “Bryan beamed. “I just got a job at the Eagle Movie Theater.”

“That’s awesome!” Gunnar said. “You should get them to play our favorite show!”

A few weeks later, Gunnar walked into the theater to find a packed room. Bryan was at the door, meticulously checking tickets to make sure everyone had paid.

Before the lights turned down, Bryan grabbed the empty seat next to Gunnar and turned to his friend. “I used your idea – and look how many people came!”

“What idea? I’m not — ” Gunnar started to say, but the lights went down and a “No Talking” sign flashed across the screen, stopping him mid-sentence.

They both sat back in their chairs as the opening credits for MythBusters played and the audience cheered.

“Nice!” Gunnar mouthed, as they silently high-fived in celebration of Bryan’s achievement.