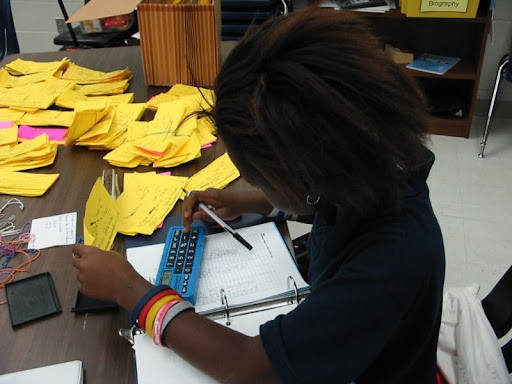 Jason sat in silence, stunned. The Myersville bank manager, at the request of her teacher Mr. Brown, had just frozen Jason’s bank account after he tried to deposit two thousand Micro dollars he’d earned by selling lottery tickets to his classmates.

“But why?” he asked, already knowing the answer.

“I don’t think this lottery business is a good idea. You’re tricking your classmates into handing over all their money,” Mr. Brown said disapprovingly.

Jason felt helpless, but only for a moment. He sprang from his chair and headed for the door.

“Where are you going?” the bank manager asked, still holding the stack of seized money.

“I need to speak to Hallie,” he declared loudly as he reached the door to the President’s office.

The sixth grader looked up from her desk. “That’s me.”

“I need your help,” he said, reaching for something on her shelf. “Can I grab this?”

“Go ahead. Anyone in Myersville is allowed to come in and read the Constitution whenever they want.”

Jason plopped the binder on the desk, sat down and immediately began flipping through it.

“Are you looking for anything in particular? I know all the laws,” Hallie said.

“Lottery… raffle…” Jason mumbled under his breath. “It’s not here. There’s no law saying that we can’t have a raffle or lottery.”

“Hm, no. I don’t think so,” Hallie said. “Wait, are you the one running that Lucky Lottery thing? My little sister’s friend won 100 Micro bucks last week!”

Hallie’s smile disappeared. “Come with me,” she said.

As the pair sat side-by-side in Mrs. Downing’s office, Jason began to sweat again. What if the principal agreed with Mr. Brown? Or what if she called his parents? Or expelled him from school?

“Mrs. Downing, Jason here is running a lottery. He’s making a lot of money, and the bank just froze his account. Can they do that?”

“What does the Constitution say?” Mrs. Downing asked.

“There’s nothing in there about a lottery or raffle in the Constitution and he filed his business plan and has the proper business license. I checked.” Hallie stated.

“Well, then I guess you have your answer,” Mrs. Downing said. “Unless a new law is created, the bank has no right to take Jason’s money because he followed proper procedure and didn’t break any laws.”

Hallie nodded and Jason jumped from his chair. “Thank you! Thank you both!”

Hallie immediately met with the bank manager, who reluctantly agreed to unfreeze the account. Jason let out a sigh of relief as he clutched his deposit slip. But the calm didn’t last long.

The next day, Jason’s friend Grant found him in the hallway. “I’ve been looking all over for you!” he said, nearly out of breath.

“The legislature called an emergency meeting. They’re in the library right now, writing a new law to make the lottery illegal!”

“I think some kids are mad they didn’t win. And some of the teachers are mad, too.”

Jason frowned. “I never meant to cause such a mess.”

Grant stopped walking. “Wait. What if you protested? Or made a petition? Remember when we made the petition to go on that field trip to the waterpark? We got the whole grade to sign it.”

“But everyone is mad at me. Do you really think they’ll support it?”

Grant glanced down at Jason’s hand. He was holding 20 Micros he’d made from selling lottery tickets that morning.

Grant and Jason arrived at school the next day, their arms full of flyers. “I’ll give you 10 Micros if you pass these out to your class,” he whispered to a group of students passing by, repeating his offer until he’d unloaded all 200 flyers.

By lunchtime, everyone had gotten a flyer. He began passing around the petition and it didn’t take long before he’d collected several hundred signatures.

He placed the petition on Hallie’s desk. “Is this enough to stop the new law?”

Hallie glanced it over.

“Well, it looks like the Lucky Lottery is here to stay.”

“So what are you going to do with all that money, anyway? Even though you’re only a fourth grader, I don’t think you’ll be able to spend it all before you go to junior high! And you’re going to make even more money now that the lottery is still legal…” her voice trailed off as she thought about what she’d just said.

“Well,” Jason said. “My friend Grant works at the Myersville Gallery and is an awesome artist. I want him to draw a bunch of dinosaurs for my room – I think I have enough money for 100 drawings!”

“Well, we just learned about Endowments in my class,” Hallie offered. “You could start an Endowment for the Arts.”

“Well, I think you can put some money in a special account at the bank,” Hallie explained. “And it will earn interest and you can donate a certain percentage to the gallery every month.”

“I like that,” Jason said. “I think I’ll do that! Then everyone at the gallery will get money to make more art.”

Hallie smiled, but inside she was worried. Jason’s heart was in the right place. But there was only so much money available. And the more kids who played the lottery, the more money Jason would earn and the less the citizens would have to spend. And unless he started buying hundreds of dollars worth of goods a day, every business in Myersville — except for the gallery — was going to be in a trouble soon.