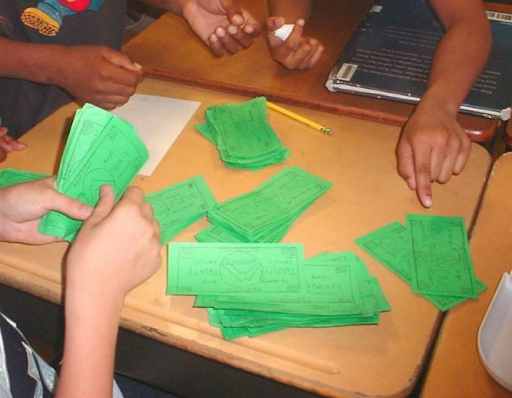 “How would you like to win a hundred Micro bucks?” Jason asked a fellow fourth grader between bites of his peanut butter sandwich.

“What?” His classmate leaned in closer.

He held up several small squares of paper.

“You just buy one of these for 2 Micro bucks.”

“Well, each of these has a number on it,” Jason explained. “At the end of the week, I pick a random number and whoever has it, wins.”

“Oh, like a raffle!” the boy exclaimed. “My church does that.”

“Sort of, yeah,” Jason paused for a moment. “I like to call it… the Lucky Lottery.”

The boy’s eyes widened as he handed over four micros. “I’ll take two.”

When time came to draw the first winner, Jason was nervous but excited. He’d taken extra precautions to make things fair, first by branding each piece of paper he sold with a one-of-a-kind stamp his aunt had given him for his birthday a few years earlier and second by allowing another student to draw the winning number from an empty cookie jar he’d found in a kitchen cabinet.

“The winner is… ” several kids banged their knuckles on the table as their classmates waited in suspense. “Forty-seven!”

“Me! I have it!” she excitedly shoved the paper into Jason’s outstretched palm. He paused for a moment to check for the stamp.

“Wow…” she said as he counted out the money in front of her. “I didn’t think I could really win.”

Jason turned to the rest of the kids. Half were excited that the prize money was actually real, and the other half were disappointed they didn’t win it. “I’ll be doing another drawing at the same time next week. You can start buying your tickets for that now.”

Three days later, Jason strolled into the Myersville Bank. As he was filling out the deposit slip, the sixth-grade teller laughed. “I think you missed a decimal point,” she said.

“But… nobody in Myersville has that much money,” she said. “It’s not possible.”

Jason plopped the stack of Micros on the table. The teller began counting it slowly, then stopped. “I think I need to grab my manager.”

Together, it took the teller and manager almost 10 minutes to count the nearly two thousand Micro dollars, which caught the eye of their facilitator, Mr. Brown.

“Where’d you get all this money, Jason?” he asked.

Jason was hesitant to answer. Were they going to take his money away? He hadn’t stolen anything. The tickets were willingly paid for, and he thought his lottery system was very fair. Besides, he’d spent lots of money in the market that week, and the all the businesses in Myersville were excited to have him shop at their stores.

“The lottery?” Mr. Brown asked, confused. “Did you win something?”

Jason produced a stack of new lottery tickets. “No, I’m selling them,” he said in a quiet voice.

“Excuse us a minute,” Mr. Brown said, pulling the bank manager away from the table. Jason began to sweat.

They returned a few minutes later. “I’m sorry, Jason,” the bank manager said, her voice wavering. “I’m going to have to freeze your account.”