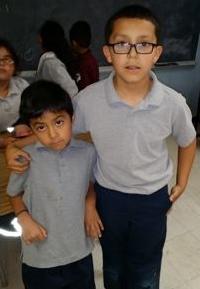 Jordan shuffled a stack of papers on the desk and let out a heavy sigh.

Anthony immediately noticed the pained look on his manager’s face. “What’s wrong?” he asked. The two fifth graders had been working side-by-side at Capiville Credit Union for eight months and had become fast friends.

“No, it’s horrible,” she answered, throwing her hands up in the air in dramatic fashion. “It means we have to move!”

“I know,” Jordan said, “It stinks. But there’s nothing I can do. I’m leaving in 2 weeks. That’s why I’m filling out this paperwork.” She held up a paper from the stack in front of her. “I’m nominating you to become the new manager, but the staff has to vote to confirm it.”

“Well, you’re the assistant manager. Who else would I pick?” she cracked a smile for a brief moment.

“Besides,” Jordan continued. “You’re doing a really great job. Everybody else thinks so too. I’m pretty sure you’re going to be an awesome manager.”

Anthony’s head was spinning. His boss was moving, and he was about to become the manager of the school’s only bank. He didn’t know whether to be happy or sad. At that moment, he was nothing but confused.

“You do want the job, right?” Jordan asked, snapping Anthony out of his daze.

Jordan nodded. “Me too.”

The following Monday, Jordan officially resigned and the Capiville Credit Union staff unanimously voted in Anthony as their next manager.

“Well, that was quick,” Jordan said. “So, what’s your first order of business, manager?”

“I think I need an assistant manager,” Anthony said in a worried voice. “I can’t do this by myself!”

“I couldn’t have done it without you, so you definitely need an assistant manager. Who are you going to pick?”

Anthony and Jordan silently surveyed the employees of Capiville as they worked – counting money, filling out paperwork, interacting with customers.

“What about Jayden?” Jordan suggested.

Anthony made a face. “He’s always late. Every day.”

Anthony shook his head. “I think I have someone in mind. But I don’t know if everyone else will agree.”

Jordan was intrigued. “Who!?”

That night, Anthony tossed and turned. What if everyone laughed at him for nominating Miles? What if they were so mad that they fired him on his second day as manager? He got out of bed and wrote down each employee’s name, along with their skills and weaknesses. After doing that, he knew he was making the right decision.

Before they opened the bank the next day, Anthony addressed his employees.

“I’m really honored to be your manager,” he started. “You all work really, really hard, and you should be proud of that. I know I am.”

Kids were nodding their heads in agreement. Anthony took a big gulp and continued, “I’m going to need an assistant manager. I’ve thought a lot about this, and some of you might be surprised by my choice, but let me explain.”

“I’ve decided to nominate Miles,” he said. The room was immediately buzzing. Miles’ face was red as everyone turned to look.

Anthony pointed in his direction. “I know Miles is only six. But I’ve learned a lot from him. And I think we could all learn a lot from him. He’s smart, he’s enthusiastic, he’s always working hard and ready to learn something new.”

“I think Miles would be great at helping me train new employees, especially the first and second graders. And I know he’d be good at keeping track of everyone’s time sheets.”

“He is really organized,” a second grader spoke up. “He always helps me put my deposit slips and checks in order.”

“Yeah,” another employee blurted out. “Miles taught me a faster way to count my money tray.”

Soon, everyone was sharing their stories about how Miles had helped them. Anthony smiled. “So, should we have a vote? All those in favor of voting Miles in as assistant manager, raise your hands.”

Hands shot up around the room. Anthony began to count, then stopped. “Well, it looks like everyone voted yes.” He turned to Miles and motioned for him to join him at the front of the room. Jordan gave them both a high five.

“Congrats! What do you think?” he asked his new assistant manager.

Miles thought for a second. “I think… you made an excellent choice.”

Anthony laughed. “Oh yeah? Me too!”