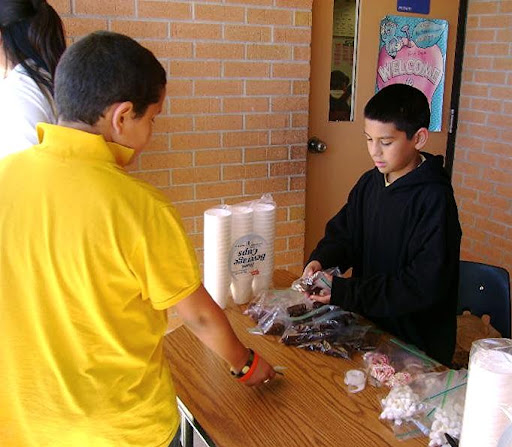 As the 4th grade manager of City of Light’s snack bar, Jackson was growing tired of dealing with employees who didn’t seem to care. He tried to explain himself. “But we need time to prepare before the marketplace opens. When you’re late, Kayleigh has to do inventory by herself and then -“

“I get it, OK?” Jacob said, slamming his backpack on the table and rolling his eyes. “Why are you always yelling at me? Let’s sell some chips or something.”

Jackson was annoyed. How was he supposed to run a business if his employees weren’t willing to help out? If only Jacob knew how difficult it was to manage the entire snack bar operation, maybe he’d think twice about talking back and being so rude.

On the bus ride home, the idea came to him. “Of course!” he said aloud, suddenly realizing that six of his classmates were staring at him.

The next day, he proposed the idea to the snack bar’s facilitator, Ms. Keller.

“I’m having a problem with one of my employees,” he started.

“Have you written him up for his behavior?” she asked.

“Several times – in fact, he’s one away from being fired. But I have an idea. I want to make him manager.”

“Just for a few days. I think once he realizes how hard it is to run a business, he’ll be more courteous to me and to his co-workers.”

Ms. Keller thought for a moment. “Jackson, I think that’s the perfect solution. Have him walk a mile in your shoes!”

Jacob was confused, but excited. “You want me to be manager this week? Awesome, piece of cake! Do I get a raise, too?”

“We’ll see,” Jackson said. “If everything runs smoothly, maybe you’ll get a bonus.”

It didn’t run smoothly – not at all. On the first day of Jacob’s managerial career, two employees were out sick. When another employee casually strolled up to the snack bar five minutes late, Jacob was rushing from table to table. “Where have you been?” he asked. “Everyone’s out today and the market is about to open. Some of the snacks are still packed in boxes and nobody wiped down these tables. Ms. Keller said we’d get penalized if we weren’t ready in time.”

He looked at Jackson for support. “You’re the manager,” Jackson responded with a shrug. “Tell us what to do.”

Jacob told the tardy employee to help wipe down the tables and decided to team up with Jackson to get all the boxes unpacked and the snacks neatly arranged. They finished with minutes to spare before the marketplace opened and Jacob let out a huge sigh of relief.

Soon, the snackbar was mobbed with sixth, seventh and eighth grades clamoring for crackers, pretzels, carrot sticks and other snacks.

With the usual cashier out sick, Jacob was running the register and trying to keep his other employees on task at the same time.

“How do you do this every day?” he asked Jackson. But the manager-turned-employee was too busy helping a sixth grader pick out a bag of pretzels to hear Jacob’s question.

When the marketplace closed, Jacob sat with his head down on the table. “Wow, I’m tired,” he complained.

When they were finally finished, Jackson turned to his new manager. “So, you ready to do this again on Thursday?”

be manager again. It’s way too much work!”

“I’m sorry I wasn’t much help before,” Jacob said. “I had no idea how hard it was to be a manager. Thanks for keeping everything running smoothly every day. I have no idea how you do it without going crazy.”

Jackson laughed. “It’s a lot easier when your employees listen to you!”