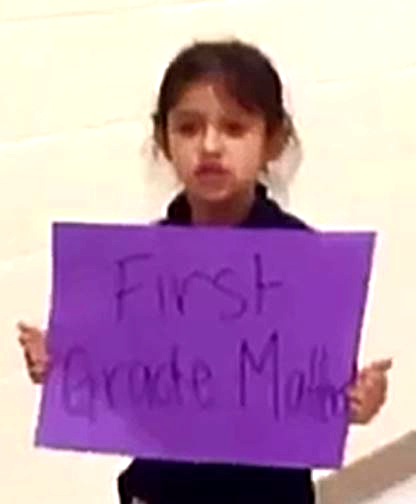 “Why are you wearing that?” six-year-old Hudson asked his big sister, who was busy smoothing out

the wrinkles of her green cotton dress. It wasn’t the usual navy blue uniform, and Hudson was confused.

“I have my first Congress meeting today,” Ruby answered. “We’re allowed to dress up nicer for that.”

“You’re making rules?” Hudson questioned her. He remembered her excitedly telling their parents something at the dinner table recently, possibly about Congress. But as usual, he wasn’t paying attention.

“Aww,” Ruby said as she patted the top of her little brother’s head.

enough to be in Congress yet. Maybe when you get to second grade…”

“But we have to follow the rules,” he said.

“And we don’t get to talk about them before you decide on them.”

“Hm,” Ruby paused. “I guess you have a point. But that’s just the way it is. Sorry! Since when do you care about school anyway?” She grabbed a spiral notebook and her backpack and bounded toward the door. “C’mon, we’re going to miss the bus. I can’t be late!”

That day at school, Hudson gathered up his friends to tell them what was going on.

“My sister gets to be in Congress ’cause she’s in fourth grade. How come we don’t get to make rules, too?”

“Yeah! I want to make a rule for no homework!”

“Or ice cream every day for lunch. Not just Fridays!”

“What about no more uniforms?” one first-grade boy said, frowning at his khaki pants.

“So what are we supposed to do, Hudson?”

The rest of the week, Hudson made his rounds at the school, telling anyone who would listen about Congress excluding kindergartners and first graders, and how unfair it was.

Mr. Yi happened to overhear one of his rants and approached him when he was finished.

“What’s your name?” he asked with a smile.

Hudson gulped. Had he heard him talking badly about the Congress? He didn’t mean to get in trouble.

“Hi Hudson, I’m Mr. Yi,” he offered his outstretched hand. “I heard you talking about Congress, and I think you’re right to be mad.”

Hudson’s eyes widened. “Really? You do?”

“Of course. You’re just like a colonist, before the start of the American Revolution. Upset about having to follow the rules, but not having representation.”

Mr. Yi laughed, “You’ll learn about that later. But what I’m saying is, I understand why you’re upset. And I wanted to tell you about a way you can show everyone how you feel, without getting in trouble.”

“How do I do that?” Hudson was intrigued.

“You can make signs. And gather near the doors of the auditorium before, during and after the Congress meeting, telling everyone how you feel. Peacefully, of course.”

“Protesting, hmm. It sounds like a good idea. Thanks a lot!”

Before Mr. Yi had a chance to respond, Hudson was halfway down the hallway, rushing to tell his friends about what he’d just learned.

Hudson explained how it all worked, and they were excited about the prospect of protesting.

“I have lots of different colored paper,” one girl offered.

“I can bring all of my markers.”

“So it’s settled. We will all meet here tomorrow and make signs so we can protest!”

Hudson could barely contain his excitement that evening.

“What’s your deal?” his sister asked, suspicious of his unusually cheerful behavior. “You’re up to something…”

“Can’t tell you,” he said with a smile. “But you’ll find out tomorrow.”

The next day, Ruby donned another dress in preparation for her second day of Congress meetings. Meanwhile, Hudson sneakily stocked his backpack with some of his sister’s art supplies, including markers, crayons, glue sticks and glitter.

Thanks to word of mouth, the small group that had gathered the day before had grown considerably – Hudson didn’t have the time (or patience!) to count, but he figured it was at least 40 kindergartners and first graders!

They hovered over the table, writing messages like “Let us in!” and “We want to make rules!” in green glitter and red marker.

“OK, it’s time,” Hudson said, noticing the older kids were heading down the hallway toward the auditorium. “Get your signs ready!”

As they rushed to the doors, Hudson had some last-minute advice from his fellow protesters.

“Be nice!” he said, remembering what Mr. Yi had said. “This is a peaceful protest.”

“What’s going on down there?” one fifth grade girl asked as she made her way to the Congress meeting.

“Is that your brother, Ruby?”

“What are you doing?” Ruby whispered to her brother. “You’ve never done anything like this before. You’re embarrassing me!”

“I’m protesting,” Hudson said in a serious tone. “I think it’s unfair that we can’t be in Congress.”

Mr. Yi appeared behind them. “Nice work!” he said. “You really got everyone’s attention.”

The assistant principal, who usually sat in on Congress meetings, also overheard. “Well, it looks like we have something important to vote on today…”

Thirty minutes later, the gavel hit the desk and it was decided. Kindergartners and first graders would each get two representatives in Congress.

“Run for what?” Hudson asked, his mind still focused on the successful protest.

“Absolutely,” she said, hugging her little brother. “We better start making some new signs. I’ve got a ton of markers and…”

“I know,” he said, opening his backpack to reveal the stolen supplies.