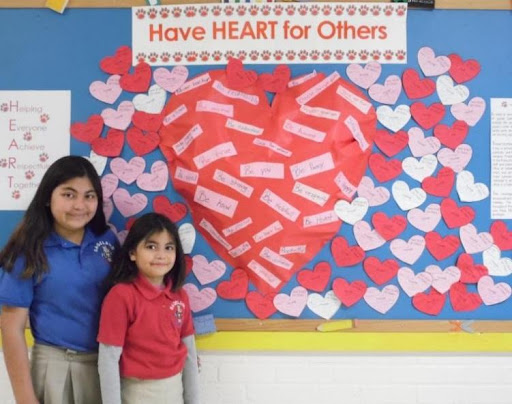 As soon as Mila stepped out of the school library, she could hear the sobs and sniffles.  “I wonder who’s crying,” she thought, assuming it was a homesick kindergartener. When she finally got close enough to see who it was, her heart jumped and she raced toward the picnic table where the little brown-haired girl was sitting with her head in her hands.

“Talia?” she called out to her younger sister. “Are you OK? What’s wrong? What happened?” She immediately threw her arms around her, as if to shield her from the outside world.

In between sobs, Talia slowly explained to her sister what happened.

“I… I was doing a Micro project with Olivia and Taylor,” the fourth grader stammered. “Taylor said she had to do the report in front of our group because nobody understands when I talk.”

“She said… she said I have a funny voice and nobody understands me.”

Mila continued to hug her sister, but clenched her fists. “She’s talking about your accent. Our accent.”

“Then… she said it in front of Alex and he made fun of me, too.”

“Oh, Talia,” Mila said in a soothing voice. “Don’t listen to them. Everyone can understand you. Besides, your accent is beautiful.”

Just then, Taylor strolled up with a large group of fourth grade girls.

Mila stood up, expecting a confrontation. “I hope you came over here to tell my sister you’re sorry for bullying her,” she said.

“What?” Taylor asked. “I can’t understand what you’re saying.” She laughed, and the girls behind her followed suit.

Mila was in no mood to start a fight. “You know exactly what I said,” she muttered under her breath. “And I’m sorry you have to say mean things to make yourself feel better.”

On the way home from school, Mila’s mind was racing. Her mother had told them that moving to Texas would be a big adjustment, and to be patient. She was trying, but it was hard to see her sister so upset. She wished her mother had never taken the job. She wanted to go home, back to their old school and their old friends.

At dinner, Talia was quiet. Mila was still mad, but her mind had moved on to finding a solution to the problem.

“Mama, do you think everyone is a nice person?” she wondered aloud.

Her mother was surprised by the question, but responded.

“I think deep down… everyone has a good heart. But not everyone knows how to use it.”

“Do you think if you said nice things to a mean person, you could teach them how to use it?”

“Mila, was someone mean to you at school?”

“Someone was mean to Talia,” Mila said. “But I think I know how to fix it.”

The next day, Mila and Talia marched into school with a purpose. They plopped a big stack of construction paper hearts on Ms. Costello’s desk.  “We have an idea,” Mila said. She nodded to Talia, “Do you want to explain it?”

“We want everyone at Sageland to be really nice,” Talia said timidly. “We thought if we all wrote nice messages about each other, everyone would be happy.”

Ms. Costello’s face brightened. “Girls, that’s such a good idea!” She picked up one of the hearts. “I think getting one of these with a nice message would really make someone’s day.”

“What if we posted them in the hallway so everyone could read them?” Mila asked. “Then people would really get into a good mood.”

“Or we could read them in the morning announcements,” Talia suddenly piped up.

Mila looked at her little sister, surprised. “Wow, that’s even better. I didn’t even think of that! What do you think?” she turned to Ms. Costello.

“I think that you’ve just started a very important project,” she said. “And I’m really proud of both of you. Let me talk to Principal Aguilar and see what we can do! Have you thought about what you want to call this heart message project?”

“Together!” Mila finished. “Helping Everyone Achieve Respectfulness Together.”

A week later, their project was approved. But Ms. Costello had asked them to explain it to the entire Scottie population before handing out the hearts, and Mila was nervous.

“Don’t worry,” her younger sister assured her. “Not even Taylor can say anything bad about this.”

Mila smiled. “You’re right! And even if she did, I would still say something nice to her. Because it just feels good to be nice.”

Mila was pleasantly surprised to find that Talia was right. Everyone in Sageland was excited about their new H.E.A.R.T. project – they formed a huge line to pick up their first pieces of heart-shaped paper. “We’re almost all out of hearts!” Talia exclaimed to her sister.

“I’ll help you make more,” a voice said from the middle of the line.

Taylor stepped forward toward the table where Talia and Mila were sitting. Mila was worried, but Talia was happy.

“Great!” Talia said, writing out a message on a pink heart as spoke. “We could really use the help. Here’s some more paper and scissors.”

She handed Taylor the construction paper and scissors, as well as the folded pink heart.

As Taylor walked to an empty table, Mila noticed her unfold the note, read it and smile.

“It worked,” Mila whispered to her sister.

“You were right,” Talia said. “Everyone has a good heart. Sometimes you just have to say something nice to uncover it.”