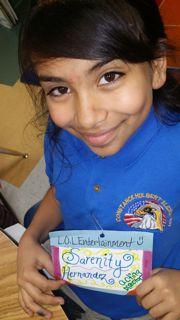 “Well, the votes are in,” Mr. Mendez said, looking around the room of excited elementary schoolers. “And the next president of LOL Entertainment is… Mia!”

Mia looked up, surprised to hear her name. She knew she had given a good speech, but she hadn’t exactly expected to win. In fact, she’d only run for president because some of her classmates had told her to.

She walked up to the front of the room and stood next to Mr. Mendez. “Mia, do you want to say a few words to your employees?”

Your employees. The words sounded strange to her, but she figured it would sink in eventually. Maybe it’d be just like the time she was captain of her soccer team. She took a deep breath and began to speak.

“I just want to thank everyone for putting your trust in me. I have a lot of good ideas and I can’t wait to work with you!”

Mia went back to her seat and was immediately surrounded by her classmates, some congratulating her and others already discussing their ideas for LOL Entertainment’s future. She nodded, even taking notes as she listened to their suggestions. Then she glanced down at her watch and gasped.

“I’m so sorry,” she said. “But my mom is probably waiting for me outside. I have a piano lesson.” She waved goodbye as she hurried out the door. “These ideas are great. I promise we’ll talk more tomorrow!”

The next day, she talked to a few employees as promised, then met with her new vice president, Alex. They discussed the venture’s budget and goals for the year, including the idea to host a ball for the entire school and their family members.

“I’m really glad you were elected president,” Alex said. “We’ve gotten so much done in the past few days – and I’m thinking on Tuesday we can present all of this to Mr. Mendez.

Mia’s smile quickly turned into a frown. “Tuesday? I have basketball practice on Tuesday.”

“You play basketball, too? Is there anything you don’t do?” Alex said with a laugh. “We can do the meeting another time…

“No, I think you should talk to Mr. Mendez on Tuesday,” Mia said. “I know you’ll do a good job. Plus, we should get started on planning the ball as soon as possible.”

Mia continued to juggle her many activities over the next two weeks, relying on Alex to help supervise the employees and fill in during meetings.

One afternoon, Mia stayed later than usual, her head down as she scribbled furiously in her notebook.

Alex approached. He noticed the budget worksheet they’d gotten last week during math class, the one they used while working on LOL’s budget for the upcoming quarter. “Budget issues? I thought we had it all figured out.”

Mia looked up and let out a small sigh. “It’s not about money,” she said. “Can I tell you something?”

Alex nodded and sat down next to her. “Vice president, at your service.”

“I’m sure you can get it all done,” Alex said reassuringly. “Plus, I can cover the meetings and –“

“What do you mean?” Alex asked.

Mia looked down at her notebook, where she’d begun writing an important letter. “Meet me in Mr. Mendez’s room tomorrow morning.”

As Mia walked into the classroom the next day, she took a big breath and placed an envelope on

“My mom told me this is called a ‘letter of resignation’,” she said.

Mr. Mendez looked up at her, shocked. “But Mia – everything is going wonderfully with LOL Entertainment.”

“That’s because of Alex,” Mia said as her vice president walked in the door. “He’s been so great covering all the meetings while I’m at piano lessons or basketball practice or Girl Scouts. I really think he deserves to be president. And I think LOL deserves a president who can actually be here.”

“I didn’t realize how busy you were, Mia!” Mr. Mendez said. “But I’m very impressed that you’re coming to this decision all on your own. Alex, what do you think?”

He was speechless, but managed to nod.

“Can we call a meeting to discuss it with everyone? I want to tell them all in person, they deserve to know what’s going on,” Mia said.

“Actually, I was talking to Alex,” Mia smiled as Mr. Mendez laughed. “After all, he’s the boss now.”