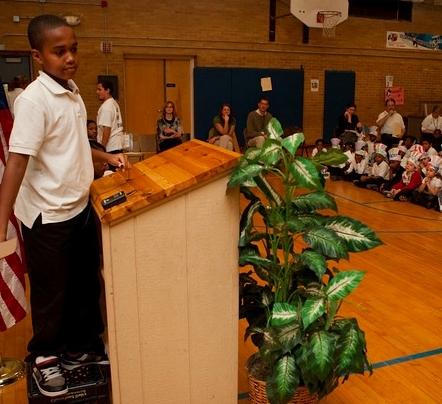 “Don’t sweat it. We’ve been working hard on this for two whole weeks, and everyone agrees that it’s

Jordan surveyed the audience in the auditorium. As the 6th grade leader of this year’s ConstitutionalConvention, it was his job to lead the assembly as they reviewed the school’s governing Constitution page by page.

“You’re right,” he said, taking a deep breath and picking up the neatly stapled Constitution booklet. “It’s going to be good. Everyone’s going to like it.”

The first 15 minutes of the meeting went exactly as planned. Jordan was feeling more confident than he’d ever felt in his 11 years of life.

“And now we’re in the

final section here,” he said. “This section covers taxes and voting rights for 2nd through 6th graders, and it — ” he was interrupted by a loud thumping sound. He looked up and couldn’t immediately identify where the noise was coming from.

“As you can see, it –” he tried to continue, but the thumping got louder.

He leaned forward, away from the glaring spotlight that was obstructing his view. In the back of the auditorium, he saw a large group of younger kids, jumping up and down and waving signs. It almost felt like the room was rocking. He leaned down to Kira. “What is going on back there? What do those signs say?”

Just then, the kids began to chant. “Let us vote! We want to vote!”

Jordan stepped back up t

o the microphone, his mouth agape. He wondered what George Washington would do in this situation. He swallowed, then began to speak. “Quiet, please.”

It wasn’t working. Several of the teachers rushed to the back of the room to quell the commotion.Mrs. Thoreau warned the younger kids that the assembly would be canceled if they didn’t settle down. She scurried up to the front of the room.

“Jordan, it appears the kindergartners and first graders are upset that they are excluded from voting.”

“But, we know. We did that because everyone decided they were too young for –”

He was interrupted by his classmate , who shouted loud enough for the entire auditorium to hear. “You don’t pay taxes!

We WANT to pay taxes,” one brazen first grader retorted.

Jordan’s head was spinning. He decided to channel the spirit of the Founding Fathers. After all, he was the leader of the Constitutional Convention.

“Mrs. Jones, what if we take a vote right now? If it passes, everyone will pay taxes and vote, regardless of grade.”

“If they really want the responsibility, I think it’s a great idea.”

Jordan grabbed the microphone. “OK. Let’s settle down. We’re going to vote on this right now. Convention members — all in favor of EVERYONE paying taxes and voting, raise your hands.”

The 4th, 5th and 6th graders glanced around at each other, then slowly began to raise their arms. It was unanimous.

Jordan breathed a sigh of relief. “The motion has passed. Equal voting rights and tax responsibilities will be extended to the kindergarteners and first graders.”

Cheers erupted at the back of the room. Kira leaned over to shake hands with his friend. “Nice work!” he said, handing him a full bottle of water.

“Hit it on the desk, like that wooden gavel thing they had at the First Constitutional Convention!”

Bang! And just like that, the MicroCommunity School’s First Constitutional Convention was over.