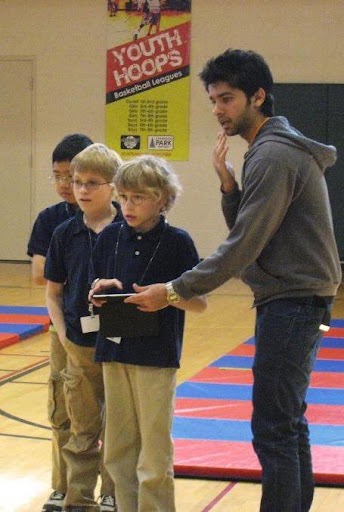 White smoke billowed out from below the rocket as it rumbled, ready to blast into the sky.

“3…. 2….1…. and we have liftoff of the lunar shuttle, bringing supplies and resources to help finish

construction of the Moon Colony.”

“Benjamin!” Suddenly, the fourth grader was shaken from his daydream by a tap on his shoulder. “Are you paying attention?”

They both looked down at his notebook, where instead of writing the words for this week’s spelling test, he’d been scribbling plans for a space station on the moon. “Uh, yes,” he stammered as Ms. Newman walked back to the board.

Back in his daydream, Benjamin saw himself on stage, receiving an award from NASA for his work on the Moon Colony project.

“I bet there are no spelling tests in space,” he muttered aloud as his classmates snickered.

The next day during Micro time, Ms. Newman approached Benjamin. “I have some exciting news,” she said as he continued working on his sketch. “It’s about space.”

Benjamin looked up as Ms. Newman continued. “We’re going to have some students from the University of Illinois come in to talk about zero gravity… like weightlessness in space. And they’re bringing remote controlled drones for us to test pilot.  Would you be interested in that?”

“But I have a little homework assignment for you first,” Ms. Newman said as Benjamin began to scrunch his face in protest. “I want you to think of some questions for the Moon Goons.”

“Did you say Moon Goons?” he couldn’t believe what he was hearing. Not only were they going to be visited by a group of students working on a project involving the moon, he was going to be able to ask them anything he wanted!

Immediately, he began scribbling some notes. Should he ask them about how to get oxygen to his moon colony? Or what kind of construction materials he needed to make buildings on the moon? His head was spinning with ideas.

On the day of the presentation, Benjamin brought a stack of neatly written notecards, filled with questions about space travel, gravity and the moon. He had thought of so many questions that he ended up passing some of the cards out to his classmates to read.

Ms. Newman noticed the cards in his hand. “Wow, Benjamin! I’m so impressed. I can’t wait to hear their answers.”

When the students arrived, they quickly started in on their presentation. Benjamin listened intently – and even took some notes – as they talked about the weightlessness, lunar orbit and the lunar elevator, a project that involved building a cable from the moon that extended into space and could help bring spacecraft and equipment to the surface of the moon.

After their presentation, the college students opened the floor for discussion and were shocked at some of the questions and comments they were getting from the room full of fourth graders.

In fact, they were so impressed by some of Benjamin’s questions, that they promised to keep in touch with him so that they could provide more thorough answers.

“So, Benjamin, what did you think of that presentation?” Ms. Newman asked after the college students had left.

“I think that I want to go to college and join the Moon Goons,” he said in a serious tone. “Because I have a lot more to learn before I start building my colony.”