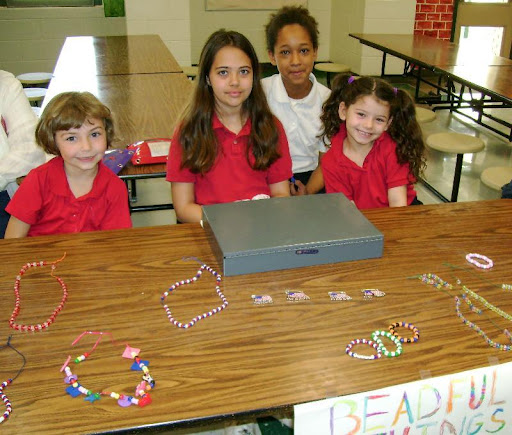 It was the first ever MicroSociety Chamber of Commerce meeting at Imagine Columbia Leadership Academy, and 5th grader Nikea was nervous. As the newly elected President, she was picked to preside over the afternoon’s activities – and there certainly was a lot of work to be done.

She cleared her throat and tapped twice on the microphone, the sound of which caught the attention of the students and teachers throughout the cafeteria, silencing their chatter. The meeting was ready to begin.

“Hi, everyone. Thanks for coming to the Chamber of…” she paused for a moment, almost forgetting what the meeting was called. “The Chamber of Commerce meeting,” she said as her teacher, Ms. Connelly smiled.

Nikea took a deep breath. She’d never run a meeting before – in fact, she’d never been to a real, official meeting in her life. She was unsure about what to expect as she glanced down at the paper in front of her and leaned into the microphone. “First on the agenda for today’s meeting. We’d like to hear from the business owners in the room about any issues you’ve been having.”

To her surprise, hands shot up around the room. She quickly made the decision to go from one side of the room to the other, so that everyone’s voice could be heard. As the business owners began to speak, Nikea noticed that nearly every student in the room had a pen and paper and were feverishly taking notes.

DeSean, who managed the jewelry store, talked about how his employees were always late for work. “It’s really hard to keep them motivated,” he said. Nikea nodded and scribbled some notes on her pad. After several other business owners spoke about the same issue, she had an idea. She whispered to Ms. Connelly, who nodded in agreement.

“If we gave you a checklist of expectations for your employees, do you think that would help?”

The room started buzzing with chatter. “Yes!” DeSean called out from his seat in the fourth row.

“But what if they don’t follow it, what do we do then?” one business owner asked.

Nikea took a moment to think before answering. “Maybe we can come up with a list of consequences, too. We don’t have time today, but I’m adding it to the agenda for our next meeting.” Several business owners nodded in agreement.

Suddenly feeling very accomplished, Nikea moved on to the other items and issues on the meeting’s agenda – like students wandering the hallway without badges. The students talked about ways to fix the issue and punish violators. One student, the University’s Dean, even brought up the idea of a mandatory MicroSociety cleaning detail for repeat offenders.

After the meeting was adjourned, the students broke into smaller groups to go over their notes. Nikea surveyed the room, feeling proud about how the first ever Chamber of Commerce meeting had gone.

A few days later at the next market, it was clearly evident that the meeting had been a success. There was a new energy in the air, and the marketplace was abuzz with activity. Nikea walked around to the business owners, shaking their hands and thanking them for their input.

The next meeting was already on her mind. “I’ll see you at the Town Hall,” she said to DeSean.

“I’ll be there” started DeSean, “We have to do something about the speed of our warehouse delivery service – my employees are using up supplies faster than they can be delivered!”