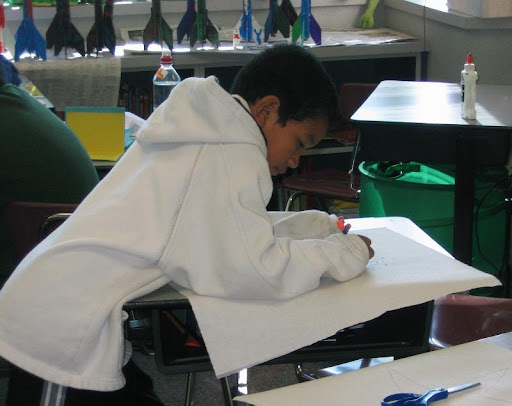 As his classmates gathered around a table discussing next month’s Micro newsletter, Mauricio sat at his desk with one hand on his chin, the other twirling a pencil.

“Mauricio,” Mrs. Collette tapped his shoulder. “Are you sure you don’t want to join the newsletter committee? You’ll earn money to spend in the marketplace – you’ll be able to buy anything you want.”

He looked back at her with an air of indifference.

“No thanks, I wouldn’t be caught dead shopping in that marketplace.” he scoffed, turning back to his sketch. His teacher and his fellow classmates had been trying to get him to participate for several months, but even the prospect of getting paid wasn’t enough to lure the 4th grader into joining. Besides, he’d gotten this far without participating in their lame projects, he’d rather spend Micro time at home doodling.

As she turned to walk back to her desk, Mrs. Collette glanced at the sketch in front of Mauricio. “That’s a really good drawing – I had no idea you were such an artist!” She paused for a second, thinking. “You know, we could use something like that in the newsletter.”

“This? This one isn’t very good,” Mauricio explained in a serious tone – not surprised in the least that Mrs. Collette would display poor taste in art. Mrs. Collette frowned slightly, typical Mauricio – even her compliments wouldn’t alter his cocky attitude.

But his face suddenly brightened. “I have better ones. A lot better.”

He flipped through his notebook, showing off his favorite drawings and explaining their inspiration. “This one is an iguana I saw at the zoo. This is the tree next to the cafeteria. This one is my cousin’s dirt bike.”

His classmates heard what was going on and crowded around his desk trying to get a glimpse of the sketches.

“Wow, that’s so cool!” Andre, the newsletter’s editor-in-chief, pointed at the iguana drawing. “I want one of those!”

“I didn’t know you were so good at drawing,” said Nevaeh. “Can you make us a cool logo?”

Mauricio squirmed in his seat, enticed by all of his new found attention but reluctant to stoop down to his classmates “level”.

“Um, sure. I guess I could do that. But if you’re going to use my art in your paper – the writing better be just as good.”

Mrs. Collette walked over to Mauricio’s desk and picked up the notebook. “Not to mention Mauricio, you could sell your art yourself, then you won’t have to worry about the quality of articles associated with it – Is anyone interested in buying a drawing?”

Hands shot up around the room, and Mauricio leaned back in his chair a bit -genuinely surprised there was so much demand for his art- he always felt he was good, but not this good. He couldn’t believe it! So many of his classmates were willing to pay for something he’d created. He quickly flipped through his notebook, picking out several drawings he was willing to part with (mostly his novice efforts) and promptly sold them to the eager 4th graders crowded around his desk.

Over the next week, Mauricio worked with Neveah to craft the perfect logo for the school’s newsletter, in addition to graphics for the next issue. In his free time, he also worked on sketches to sell – he used the funds he earned to purchase art supplies sold in his MicroSociety, upgrading from a pencil to a brush, and improving his artwork in the process.

On the day of the newsletter release, Mrs. Collette stopped by Mauricio’s desk. “So, how does it feel to be working as the head of graphics?” “Working? It doesn’t feel like working,” he replied with a slight chuckle, thinking for a moment. “I thought being an artist for other people, especially for the newspaper, would be terrible, but it’s actually pretty challenging. I guess Micro’s not too bad after all.”

“And you know Mauricio,” Mrs. Collette began, “You don’t necessarily have to work for others… if you learn a bit about business you can start your own art shop and have other artists work for you. The trick to every successful entrepreneur is finding a need that people have and filling it. You seem to have done just that, doing something you love.” Mauricio’s eyes lit up, his mind was instantly filled with a vision of Mauricio Studios- where only the finest works of art could find a home. “I never thought I’d say this, Mrs. Collette, but that actually sounds like fun.”