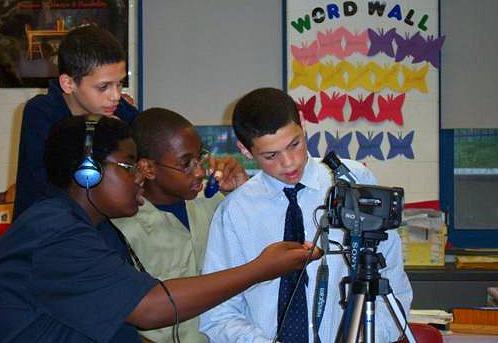 Ethan grimaced as he punched the numbers into the calculator.

“Seriously?” Paola asked, her usual optimistic tone fading. “Maybe you should check again, just to be sure.”

Reluctantly, the 7th grader-turned-film director tallied the numbers again, but the calculator didn’t lie. Filming for The Masked Mystery Man of West Oak hadn’t yet finished, and the group had spent nearly all the money they’d been loaned by the West Oak bank.

“So… what are we going to do?” Paola asked. “We have to finish the movie somehow!”

A month earlier, the two had jumped at the chance to direct their own film. But now, after collaborating with writers, set builders, cameramen and actors — and paying them all for their work — they feared that their project would go unfinished. “I had no idea making a movie would be so expensive,” Ethan lamented.

“Me neither. But we have to do something before this loan runs out.”

Ethan and Paola called a meeting with the entire film crew to break the news and ask for ideas.

“Maybe we can all pitch in a few dollars,” Abby, a sixth grade actress suggested.

“I can’t afford that! I have other things to pay for,” the movie’s main cameraman, Nadir, complained.

“Hold on, nobody’s going to have to give up their paycheck. Nadir, how much footage do you have so far?” Paola asked.

“I’d say we have about 20 minutes. Hannah has most of it edited already,” he said, turning to the group’s editing expert, an 8th grader.

“I wonder if people would pay to see what we have so far,” Ethan said.

“Exactly!” Paola exclaimed. “You read my mind. What if we charge a few dollars for a sneak preview? Do you think people would come?”

Nadir chimed in. “I haven’t filmed the crowd scene yet. What if we told them all they could be extras?”

Paola and Ethan looked at each other, their eyes widening with optimism. “That’s it!”

The entire group went to work, creating flyers, posters and tickets for their special sneak preview. They were determined to raise enough money to finish their project and release the entire movie for the whole school to see.

At the end of the week, Ethan sat and tallied the ticket sales. “Two hundred,” he said, almost not believing the words he was saying. “We sold 200 tickets! And we made enough to finish the movie!”

The crew rejoiced and congratulated each other on their efforts, then hurried back to work to finish preparing for the preview.

The next afternoon, they sat in the back of the cafeteria as their classmates watched the sneak preview, listening to their reactions.

“I can’t wait to see the rest!” one 7th grader whispered to his friend.

“I can’t wait to be in the movie – it’s so cool we get to be extras!” his friend responded.

After the preview ended, the room was abuzz with chatter – who was the Masked Mystery Man? One student boldly walked up to the film crew to ask.

“You’ll just have to wait and see,” Paola said with a smile. “The final movie opens up in two weeks.”

She turned to Ethan and the rest of the crew. “And it will be awesome – thanks to all of these people right here!”