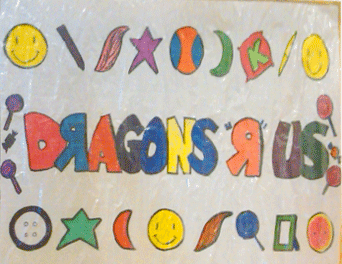 “Who wants to buy a pom pom?” Kip called out as he waved the homemade fabric ball wildly through the air.

He locked eyes with a fourth grade girl and she quickly responded. “No thanks, I have one already, I don’t really need another one.”

Kip sighed. He’d heard that quite a bit lately. When Dragons ‘R Us first opened, business was booming. But over the past few months, sales had dwindled. It seems that everyone who wanted a yarn ball or pom pom had bought one. He knew if he didn’t do something quickly, his shop would go out of business, putting many of his friends out of a job.

He was tired of waiting for things to turn around. He gathered several employees, including Maria, Jayson and Tiana, and headed out in the market to find out exactly what the students wanted – and they got answers.

But Kip knew that there was no way they had the skills to make a bag or sew a t-shirt. He was back to square one.

Feeling frustrated and confused, he sat at the Dragons ‘R Us booth, surrounded by pre-made yarn balls. He rested his head on the hard table, wishing he had a pillow.

That’s when Kip spotted his teacher hanging up a flyer on the bulletin board behind him. He got up to take a closer look. As he read the piece of paper, he almost couldn’t believe his eyes.

The next week, a woman approached Kip and his employees as they tossed around their yarn balls. “Are you Kip? I’m Sherry.”

“That’s me! Are you our new Parent CEO?”

“I am. I see you guys tossing around those balls. Is that what you sell here?”

“Well, we used to sell them. Now we just play with them,” he said with a touch of sadness in his voice.

“Don’t worry. I happen to know a thing or two about yarn and fabric. And together, I think we’ll find a way to make Dragons ‘R Us the most profitable business in the school!”

Kip was excited. He hadn’t felt this rush of energy since his store first opened. And as it turned out, Sherry did know more than a thing or two about fabric – she was a professional seamstress!

Over the next two weeks, she and Kip worked together to teach the employees how to sew. Kip’s idea to sew simple pillows made of brightly colored fabric was a big hit with the employees. With their newfound sewing skills, the employees of Dragons ‘R Us were able to make more than a dozen pillows in a week!

At the next Micro market, the students were buzzing about the new inventory – and the pillows sold out in less than 20 minutes! Kip and his employees handed Sherry a special pillow they had made as a thank you for all her help.

“Don’t thank me, thank yourselves!” she said, smiling. “You are all such quick learners, and it was a pleasure working with you.” She clutched the pillow tightly, and Kip noticed how it had taken on a temporary hour-glass shape when she lifted it over her head to show off.

Ms. Reilly didn’t know it, but she’d given Kip an idea for a new expanded product line – pillows in made-to-order custom shapes and sizes! He couldn’t wait to meet with the production team and experiment with their new sewing skills.

“No, Ms. Reilly, thank you for everything” Kip said with a spark in his eye, “you’ve made a bigger difference for Dragons ‘R Us than you know-but you’ll see when you come back next week!”