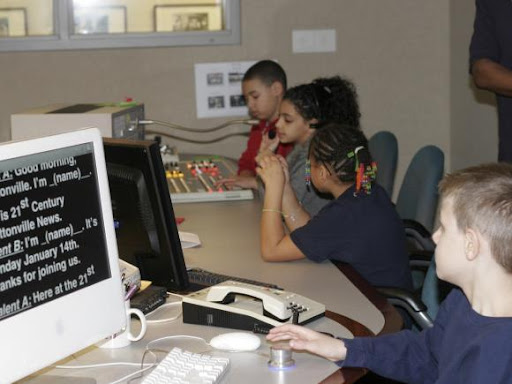 *Click* Stanley turned off the TV “Well folks, what do you think?”

Stanley was addressing his staff. All the employees at the 21st Century Digital Media Center sat huddled around the television screen watching their latest news interviews.

The pint-sized news crew was getting ready to film the upcoming Micro-Night. They decided to critique their older interviews in order to prepare.

He was met with stares and silence. “Don’t be shy, share your thoughts, whatever they are.”

Natasha, one of the Media Center’s writers, spoke up first. “Can you rewind it back a bit?”

“What do you think of the school dress code?” Stanley’s hand was seen on screen as he asked Mr. East about several of the school’s policies.

He paused the film to let Natasha comment. “We need to come up with better questions for our Micro-Night interviews. Something more, um…. relevant. You know? Something newsworthy.”

Stanley stared at the frozen image of himself and Mr. East on screen. “I think you might be right. This really has to be our best effort yet, after all, the school board’s going to see it!”

“I also think we can spice up the film a little bit,” Chip, a cameraman, chimed in, “It gets kinda boring when all we see are the interviews.”

“Yeah,” Stanley agreed, “but what are we going to spice it up with, and what kind of questions should we ask?”

The room was silent. Eyes stared intently at the screen.

“Mrs. Kowalski told me some of our corporate mentors are coming, maybe we can film them working with the kids,” suggested Natasha.

“Yeah, I like that,” replied Stanley, “maybe we could have some of our cameramen film the ventures, then the rest can film the interviews. Chip, would that work?”

Chip gave an affirmative nod, “Definitely, we have enough people on the crew, three of us can film the ventures and three can go around to film the interviews.”

But Stanley still wondered about the questions they were going to ask. How could they make an actual news story out of Micro-Night? And how would they block out all the noise during interviews?

“We still need to find out what the interviews are going to be about,” Stanley probed.

Chip asked him to rewind the film again.

“…Hmm, I feel like, I don’t know, the questions we ask need more… beef or something.”

Stanley nodded, deep in thought as he replayed the interview with Mr. East. “I think we have to think about who we’re interviewing… and what kind of information and opinions they can give us. You guys are right, most kids probably didn’t care what Mr. East thought about the dress code!”

“But who exactly are we going to interview on Micro-Night, anyway,” asked Natasha, “Parents, kids, teachers?”

“All of them! We can ask the teachers how it was planned, we can ask the kids what they like about their jobs and we can ask the parents -” Chip was on a roll. “We don’t have nearly enough reporters to cover all that!” Stanley chimed in.

Natasha hesitated, “I mean, I guess I could try to ask some questions… but interviewing adults makes me nervous!”

“Nah, you can do it Natasha,” Chip proclaimed, “I’ve seen you introduce your mom, you make everyone relax. But what about the noise, do we have clip on mics?”

“We have one I think,” Stanely weighed in, ” but I have another one I can bring from home.”

With all of the kids working together, it seemed like a solid plan for their next production was really coming together. All the employees regrouped the next day to go over their battle plan.

The writers went to work drafting 3 sets of questions for parents, kids, and teachers. Natasha got tips from Stanley on how to compose herself during an interview, and how to think of new questions on the fly. Chip met with the camera crew and went over the floor plan. He delegated six areas they’d film in order to get a nice variety of footage. Then he reviewed his mental checklist.