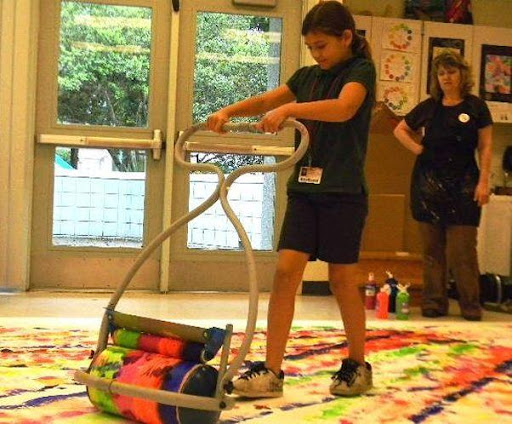 Derek nervously folded and unfolded the letter several times as he walked up to the classroom door.
Two days earlier, he had been fired from his stagehand job with the Chocachatti Micro Theater Group for missing five rehearsals.

He’d never been fired before. Feeling uneasy about starting a new job and meeting new people, he opened the letter again and read it for the seventh time that day.

“Derek is an exemplary Micro-Citizen,” Mr. O’Meara had written. “However, he is unable to attend after-school activities, so we sadly cannot keep him employed with the Theater Group. I am proud to recommend him for any job.”

Derek took a deep breath, hoping that the letter was enough to get him the open position at the Chocachatti Copy Cats printing studio, where students created pieces of artwork using stencils and large rollers, and lots of paint. It was the only job he’d seen posted, and he wasn’t sure how he’d pay the rent on his desk that month.

excited voice from across the classroom. It was Isabel. He remembered seeing her in the face-painting booth at Micro-market.

“I’m Isabel, the manager of Copy Cats. We don’t bite, I promise,” she reassured him. “Mr. O’Meara told us all about you. Is this your letter?”

He handed the folded paper to Isabel, who passed it along to Mrs. Sullivan, the advisor for the Copy Cats. Her eyebrows raised as she read the glowing recommendation. “This is great. But before we offer you a job, we’ll need to interview you. Can you do it now?”

They learned that Derek was very organized. He had experience painting sets for the Theater Group, and liked to draw. On the weekends, he often played basketball with his friends.

As he spoke, he saw Isabel and Mrs. Sullivan taking notes.

“One last question Derek,” began Mrs. Sullivan, “why didn’t you attend your rehearsals. Mr. O’Meara spoke very highly of you, you must have a good reason for not attending.”

“It’s not that I didn’t want to go–I did–but my mom needed my help taking care of my new baby brother. When he came home I wasn’t able to stay after school anymore.”

“Little babies are a lot of work, so I understand why you’re Mother needs you at  home,” said Mrs. Sullivan.

“And that won’t be a problem at Copy Cats,” interjected Isabel, “we only work during Micro market time.  You’d have your afternoons to be with your brother!”

With that, Isabel and her teacher spoke quietly for a few moments before turning back toward Derek.

He gulped, bracing for their decision.

“We think you are the perfect fit for the position at Copy Cats.” Isabel said. “Your drawing skills will come in handy when we’re making stencils, you’re experienced with painting, and we could really use some help organizing the artwork we have up for sale.”

“And you’re willingness to help at home tells me you’re the responsible and mature worker that Copy Cats is looking for,” added Mrs. Sullivan with a smile.

Derek breathed a huge sigh of relief and smiled. “Thank you! I’m really excited to join you guys and help you create art!”

“Welcome aboard, Derek,” Mrs. Sullivan said with a smile. “I’ll let Isabel put you to work.”

As he shook hands with Isabel, she glanced down at the ground.

“Cool shoes,” she pointed to his white sneakers. “But you’ll need to take them off unless you want them covered with paint!”