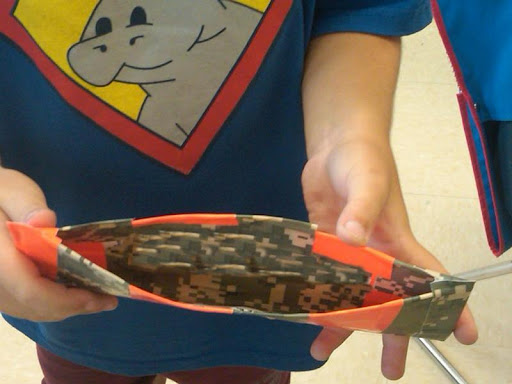 It was the first day of the November Micro marketplace, and Leo was excited to spend some of the money he’d earned reading the morning announcements at Citrus Grove Elementary.

Before school, he’d carefully placed his cash in his camouflaged wallet and tucked it into the front pocket of his backpack. When he arrived at the marketplace, he slung his heavy bag on the back of a chair while he browsed nearby.

“Hey Leo! You have to see this!” he spun around to see his friend Darius waving from across the room. He bounded over to the booth, his eyes widening as he noticed the realistic-looking rubber snake for sale.

“This is perfect – I’ll give it to my brother for Christmas!” The boys laughed.

Leo reached in his pocket for the wallet stuffed with money and realized it wasn’t there. “I left my money in my backpack, I’ll be right back!”

“But when he returned to the spot where he’d left his bag, something was wrong. The front zipper was partly open, and the wallet he’d stashed away was nowhere to be found. “Someone stole my money! Whoever it was, give it back!” he cried out – but nobody replied. He made a mental note to get the Micro Crimestoppers and CSI Unit involved but for now, that would have to wait.

Leo sat down at the cafeteria table, resting his palm on his cheek, Christmas was a mere month away, and he’d lost all the hard earned micros he’d saved so far this year- it seemed he’d have to skip getting his brother a present. “I’m sorry someone stole your money,” his friend said sympathetically. “Maybe they’ll have a change of heart and turn it in.”

“No. It’s gone,” he said, sighing heavily. “I was going to use that money to buy presents – and to start a business. I wish there was a way to make it back.”

On the second day of the monthly marketplace, Leo sat at a table in the corner. “What’s in the bag?” Darius said, pointing to the plastic grocery sack.

“My mom got a huge bag of them from our neighbor and she said I could take as many as I wanted. I’m going to sell them,” Leo said confidently.

Leo got up and walked over to a group of 5th graders gathered around a booth. “Are you looking for the perfect gift for your moms?” They nodded. “I have something you should see.” He led them over to the lemons and began listing reasons they would make a great gift.

“My mom puts them in a bowl as decorations. They make the whole house smell awesome. Your mom might want to cook with them. Or you can poke a hole and tie a string to make an ornament. There are just so many ways to use these beautiful lemons.”

Darius watched in awe as his friend unloaded the entire bag of lemons on his classmates. As he counted his newly earned cash, Leo caught the eye of Mrs. Newman, the marketplace supervisor.

“What’s going on over here?”

“I – I’m just selling some lemons,” he said quietly.

“Leo, you know you need a business license to sell things in the marketplace. Your license application hasn’t been approved yet.”

“But – someone stole my money! I had to make it back so I could buy presents – and start my business.”

“I’m sorry to hear about the theft. We’ll have to deal with that separately. But for now, you’ll need to pay back the money you made. And as a penalty for breaking the law, you won’t be able to get your license for another month.”

Leo handed over the money and hung his head in defeat at the news of his punishment. “A whole month? I’m sorry, Mrs. Newman. I’ll never break the marketplace rules again.”

A month later, the marketplace was bustling once again. An impressive printed sign directed students next door to the computer lab for printing and training services.

Leo had since taken position as owner of the computer lab’s printing and training station, a business which he, after an arduous month of waiting, had started himself. His laminated business license shined on the door, it was the station’s 2nd week of operation- a mad scramble to make profits before winter break.

“Printing Services next door to the computer lab,” Leo shouted throughout the marketplace, ” We’ll take care of all your Christmas card needs!”

And so, just days before the break began and Leo’s brother would suffer a present-less Christmas, The printing station had dished out its first round of paychecks, including Leo’s.

Leo happily made his way over to Darius’ booth of rubber snakes, and asked his friend for the funkiest looking snake he had.

“Here, you go; got any lemons for sale?” Darius jokes.

“No, I’ve learned my lesson,” Leo said as he smiled. “In fact, I don’t care if I ever see another lemon again.”