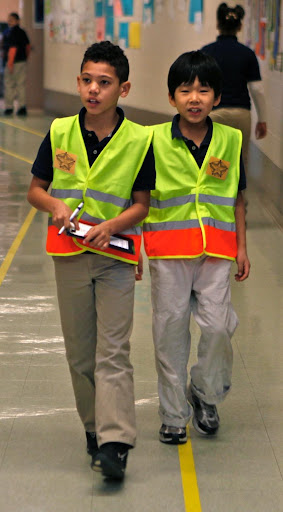 “What did I do wrong?” The fourth grade girl looked up at the fifth grade Peacekeeper. He seemed seven feet tall.

Without a word, he tore off the sheet of paper from his citation book and handed it to her. “You can pay your fine at the post office.”

“Did he just write you a ticket?” “What’s it for?” “Did he say anything?” One by one, Tamara’s friends and classmates began surrounding her. She brought the paper up to her face, reading it aloud.

“Excessive speed in the hallway.” Tamara was stunned. A straight-A student, she’d never been in trouble before. “But, I didn’t run. He must have been looking for someone else. It wasn’t me!”

Later that day, Tamara approached her teacher, Mr. West. “How do I fight this citation?” she said, waving it in the air.

“Well, I’m afraid we don’t have a process for that. We trust the Peacekeepers to write them fairly – then the post office collects the fines.”

“But what if they’re not being fair?” Tamara questioned.  “Shouldn’t we be allowed to defend ourselves?”

Mr. West thought for a moment before responding. “Well, Tamara – you bring up a good point. We’ve been talking about developing a court system. But nobody here knows the ins and outs of the law. We’d need lawyers and judges and a whole staff of people.”

Tamara nodded and let out a big sigh, figuring there was nothing she could do to clear her name. She reluctantly trudged to the Strattonville Post Office to pay her fine.

“You got a ticket?” exclaimed her friend Marci, who worked at the post office window. “That’s crazy.”

“I know, and I didn’t even do it. Now I have to fork over 10 Micros for nothing.” She handed Marci the money.

“That isn’t fair,” Marci said. “You need a lawyer or something.”

“I need to become a lawyer. That way I can defend myself, and everyone else who needs it.”

Marci was inspired by her friend’s idea. “Can we really do that? I want to become a lawyer and help people, too!”

The next day, they both went to Mr. West with their idea. “We want to learn all the laws, so we can defend people from unfair citations.”

Mr. West brought out the heavy binder filled with information about setting up a court system. “I have a friend who works in the district attorney’s office. If you two are serious about this, maybe he could come here and teach all of us – like a law school.”

“Strattonville Law School…” Tamara said, glancing over at Marci as they both nodded. “I like the sound of that. Let’s do it!”

“It’s going to take a lot of hard work. But I know you both can do it,” Mr. West said. “And once you finish law school, we can set up the court system – to make sure everything is fair.”

Two weeks later, Tamara and Marci found themselves at the front of the classroom as Mr. West’s friend addressed the class.

“Who here is interested in becoming a lawyer?” Hands shot up around the room. He pointed to Tamara. “What sparked your interest in law?”

“Fair justice,” she said. “I got a citation for running in the hallway, but I didn’t do it.”

He nodded in understanding.

“But I’m glad I got it,” Tamara explained. “Because it made me want to fight for what’s fair.”