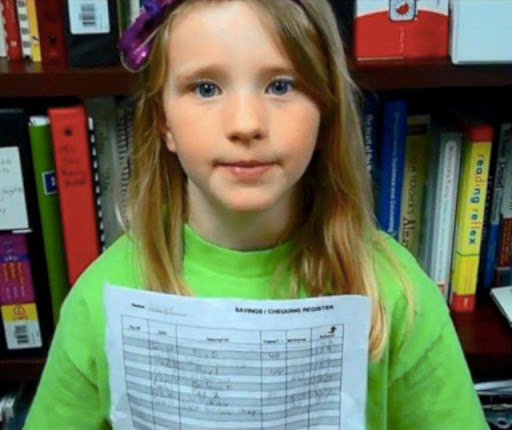 “This isn’t right,” Saige said as she peered at the paper on the desk in front of her. She grabbed her

pencil and began to erase the numbers. “Let me help you fix it.”

Her fellow third-grade student standing in front of her was embarrassed. “I’m so sorry. I keep forgetting how to fill out these deposit slips.”

“It’s OK, it happens.” Saige said in a comforting voice. “But you need to write all your transactions accurately,” she continued, more seriously. “If you don’t, you might take out more money than is in your account. If enough people do that, we have a big problem.”

“Is everything OK over here?” Saige’s manager, Liam, walked over to see what was going on.

“All good,” Saige said, pausing to look at the name at the top of the paper. “Just helping Shaun here fill out his deposit slip.

When she finished filling out the paper and explaining how it was done, Shaun thanked her for her help and disappeared back into the crowd of students. Saige turned to Liam, who was also a Member of Parliament, to voice her concern.

“That’s the 5th time this week I’ve had to fix someone’s deposit slip,” she said in a concerned voice. “And I’ve noticed a lot of bank books that aren’t properly balanced, too.”

Liam nodded in understanding. “I’ve heard the same thing from other tellers. I see you’ve been talking everyone through the steps, that’s good.”

“They always forget, though. I’ve had to tell the same people over and over how to do it.” Liam could sense the frustration building in Saige’s voice.

“Do you have any ideas about how to fix this problem. . . permanently?” he asked.

“What if we did a demonstration, where we got everyone together and showed them how to do it, step by step. We could give them sample sheets, too.” Saige suggested.

Liam’s eyes lit up. “That’s a great idea – in fact, I’m going to take your idea to our upcoming Parliament meeting and see what we can do!”

A few days later, Liam kept his promise to propose Saige’s idea to the school’s Prime Minister, Jordan. He loved the idea, and suggested that the school’s student production team film how-to demos that could be shown in every classroom and viewed online any time a student had a question.

Liam couldn’t wait to share the good news with Saige – immediately after the meeting he bounded back to the Aspen Heights Bank. “Guess what?” he asked excitedly.

“They loved it. They want you to star in a how-to video about balancing a bank book.

“A video? Me?”  She was shocked, nervous and excited all at once.

When the day came to film, Saige was ready. Without a script, she calmly and confidently went through the steps of balancing a bank book – from recording paychecks to subtracting withdrawalsfrom the account balance.

When she was finished, Liam, Jordan and the entire production crew applauded. “This is going to be great,” Jordan said, smiling at Liam and Saige. “Thanks so much for the great idea.”

Two weeks later, Saige sat at her bank window, helping the crowd of students who had come to deposit their paychecks. A few asked Saige to check over their bank books.

Saige looked up at him and smiled. “It’s great,” she said, holding up a student’s bank book. “Look at this, everything adds up perfectly.” She turned back to the student. “Great job – your balance is correct!”

“Great job to you,” the second grader said in a surprisingly loud voice. “Thanks to you I won’t ever forget how to do it!”