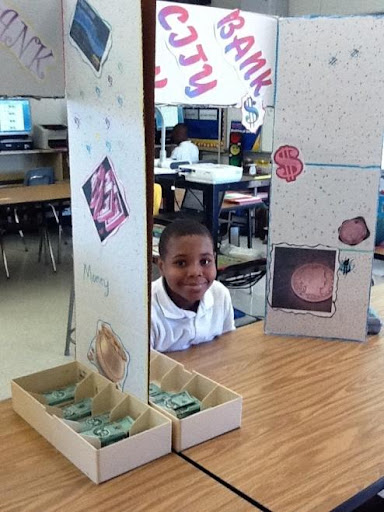 But one day, after cashing his paycheck and receiving a freshly counted bundle of Micro bills, Sam had a strange thought. He leaned over to the teller, his classmate Shauna. “I never really looked closely at the Micro money,” he said as he examined the thin pieces of paper neatly cut into rectangular shapes.

“What about it?” Shauna asked curiously.

“You could make it yourself, with a copy machine and scissors,” Sam said, as a worried look spread across his face.

“Maybe. But why would you do that?” his classmate responded with a puzzled look.

“I wouldn’t. But what if someone else does – what if we couldn’t tell the difference? Our bank would be ruined.”

As Shauna closely studied the bills in her tray, Sam walked away, deep in thought. Sure, the Micro money wasn’t perfect. Having received a small monthly allowance for doing household chores since the 2nd grade, he knew what real money looked like – it had a watermark, serial numbers, intricate drawings. But he was sure there was a way to keep his classmates from duplicating their Micro dollars – or was there?

“What stops someone from making their own money and using it to buy things?” Sam asked his teacher, Mrs. Cassandra.

“That’s called counterfeit money, Sam. There are strict laws against it – and it’s a very serious crime to do something like that.”

When he heard the words, he knew what he had to do. He thanked his teacher and hurried over to see Connor, the class legislator. “How’s the bank, Sam?” he said with a smile.

“It’s fine for now. But I need to talk to you about our constitution. We need to make sure there’s a law against counterfeit money.” Sam explained to Connor what counterfeit money was and how it could pose a big threat to his bank and to the entire Micro society. Connor promised to check the constitution and bring up the issue at the next legislature session.

The following week, Connor brought the newly drafted bill to a vote. The bill, which made creating fake Micro money a crime, was accepted unanimously amongst the class.

“We all have to work for our Micro money,” one classmate said after the vote. “I don’t think it would be fair if someone just made their own.”

Excited that his new law was embraced by his fellow Micro citizens, Sam took things even further, holding a class for his bank employees so they could easily spot fake Micro money.

“I don’t know why anyone would want to break the law,” he said. “But just in case, now we know how to handle it.”