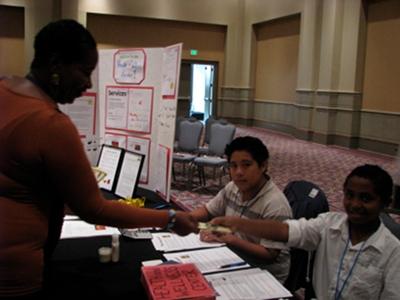 Mustafa flopped down into his seat and let out a groan. Several people had already visited hisHealth and Fitness venture yet poor Mustafa hadn’t sold so much as a single bottle of lotion. His shoulders shrugged, he wore a frown of aggravation, and he let out a lament in the form of a sigh.

Mustafa was just one of a large group of Micro citizens from Philadelphia’s Andrew Jackson Elementary who attended a mini Micro at Minority Enterprise Development(MED) Week. They were all employees that day, renting blankets and books, selling lotions and bracelets, and exchanging dollars for highly coveted micros. Their customers consisted of intimidating, business owning, and suit wearing, men and women, all of whom were two or three times the age of the Micro employees. Many patrons entered the MicroSociety area and left with arms full of goods, yet Mustafa’s soaps and lotions remained on his shop desk.

“C’mon people!” “Aw, why won’t anyone buy our lotion?” Turning to Assirem, his 5th grade marketing director he threw his arms up in the air.

Mustafa was undoubtedly upset by the lack of money coming into his storefront. There he sat, head resting on his hand, greedily watching the other venture’s items fly from stands. When Mustafa had nearly given up he remembered another particularly slow sales day during his time working at a nacho stand in the Andrew Jackson MicroSociety.

Though the marketplace was packed with shoppers, none paid heed to the lone nacho stand. Bored, Mustafa decided to try something to bring people over to the stand. He stood up, sucked in a big blast of air through his nostrils, and began shouting out about nachos, the different cheeses and dips offered, and special deals of the day.

“We’ve got nachos here! All kinds of em, folks, we’ve got cheddar, pepper-jack, american, you name it!”

Despite this, none of the other Micro Citizens moved from their spots. Mustafa wasn’t ready to give up. Driven by ambition to succeed, he shouted louder, causing the sea of Micro citizens to fear some sort of nacho related emergency. Though he received only odd glances at first, once the words he had spoken registered (and it was confirmed that he wasn’t, in fact, shouting about a cheddar catastrophe), an influx of Micro kids rushed the nacho stand. He sold out that day.

Sitting at MED Week, selling nothing, with boredom seeping in, Mustafa figured giving a similar method a try was worth a shot; who knew? If it worked on kids it could work on adults, right? The large Micro room was soon filled by enormous cries of “Lotion! BMIs! Candles!” “Come get fresh smelling candles, smooth body lotions, for only 3 micros!”

The suited adults meandering about the mini Micro slowly but surely flocked toward Mustafa’s stand, micros in hand. Mustafa didn’t let up. Even as people came to the stand he kept advertising, explaining to each and every visitor the properties of the lotion they considered buying.

“Well ma’am, I’m not sure about the allergens in this lotion,” Mustafa explained to an inquisitive customer, “Instead I can recommend these vanilla scented candles or a BMI test.”

Mustafa’s big and burly advertising scheme turned out to be a huge success. Each of the shoppers that visited the stand complimented the ambitious advertiser on his salesmanship as they left with a candle or bottle of lotion. By the end of the day, Health and Fitness secured its position as the only shop to sell out. Mustafa went home to a smiling and very successful salesman.