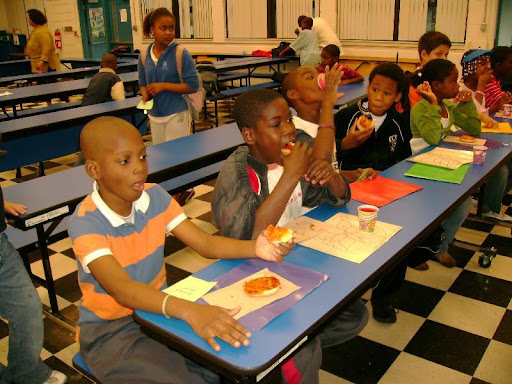 Harold glanced down at the cash in his hand. It was break time, and his classmates were busy forking over Micros for piping hot pizza slices and ice cold drinks. He could sure go for a piece of pepperoni pizza, but he was saving his money for something else. Something special.

Every day, he walked slowly through the marketplace, carefully inspecting the items up for sale. “Aren’t you going to buy anything?” he heard over and over from the vendors selling snacks, books and other handmade goods. After all, they had bills to pay!

Then, he spotted it. Just in time! His grandmother’s birthday was approaching fast – and as soon as he laid eyes on it, he knew she would love the beautiful, plush rug with soft hues of peach, blue and green. It would look perfect on the floor of the modest home they shared.

It was beautiful, but it was also expensive. He quickly crunched the numbers.

“That’s a pretty rug you’re looking at there,” Jenny said. “But there’s no way you have enough saved up to buy something like that!”

But after several weeks working as a teller at Bobcat City Bank, the shy fifth grader had managed to save every penny of his salary – which added up to $100 Bobcats. He proudly handed over his hard-earned cash in exchange for the rug, leaving Jenny speechless. His other classmates gathered around, eager to find out what Harold had finally spent his money on.

It was a good thing he’d attracted a crowd. Because the 4’x6′ rug proved a little too heavy for his own strength, and he needed the help of several classmates to haul it back to class.

“What a beautiful rug,” Mrs. Currier commented as she watched Harold admire his purchase. “What are you going to do with it?”

“It’s my grandmother’s birthday. I wanted to get her something extra special to show her how much I love her,” Harold said quietly, as an accomplished smile spread across his face.

Mrs. Currier was right. As Harold unrolled it across their living room floor, tears of joy streamed down his grandmother’s face. And although she spoke very little English, she spent the next week excitedly inviting everyone from the neighborhood into her home so she could proudly show off her favorite birthday present.

Now, every time he walks across the living room floor, Harold is reminded of the reason he had to resist the temptations of pepperoni pizza. “It was worth it,” he said. “Definitely worth it.”