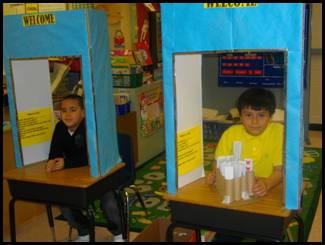 “Here’s your mail, Mr. Miller,” Cory beamed proudly as he handed over a neatly bundled batch of letters and postcards to the 3rd grade math teacher.

If there’s one thing that can be counted on at Eugenio Maria de Hostos Elementary School, it’s the mail. Neither rain, nor snow, nor science homework can keep Cory and his fellow postal workers from doing their jobs.

But it wasn’t always that way. Just weeks before, Cory hadn’t been delivering Mr. Miller’s mail, he’d been arguing with him!

“Why do I have to do this worksheet?” he fumed as he crumpled several sheets of paper and tossed them at another student, which started a chain reaction throughout the classroom. Mr. Miller rose from his desk, spitballs bouncing off his beard. “Enough,” he roared. Cory followed suit, jumping out of his desk, puffed up his chest, screwed up his eyes, and stuck out his tongue imitating his teacher. Mr. Miller dragged him off to the office. The ringleader of the class clown circus had mocked him again!

Unfortunately, the chaotic scene was quite common for the small class of students with behavioral troubles. But the day the post office opened, everything changed – especially for Cory.

“I can do that!” he exclaimed when his teacher asked for volunteers to deliver the mail for the newly formed postal agency. After all, it was a good excuse to get out of class and explore the school. Plus, he got to wear a special badge.

Cory started out sorting letters by grade and class and bundling them into packages, until a disgruntled 5th grader, Jamie, turned up at the post office. “This is way better than passing notes.” The pigtailed girl said, “It’s so fun to get mail during school…but why do I get mine so late!” Cory put aside the package he was working on. “What do you mean?”

“The rest of my class gets their mail so much quicker than me.”

Cory pulled out a map of all the postmen’s routes from under the post office desk and looked it over. “What class are you in?” he asked.

“Hm, Juan and Sean split the mail for that class,” he gazed at the map with his face locked in thought, “What the! Sean’s route is really long!” “That must be why your mail comes so late, this should make things quicker.” Cory took a big red marker to the page and redrew a weaving line through the school’s labyrinth of hallways, marking it “Sean”. “That should speed up Sean’s delivery time by at least 10 minutes.” Jamie was a bit bewildered with how efficiently Cory had worked, but walked away with a “Thanks” and a beaming smile, happy something was done to speed up her mail. Cory’s job had rapidly become more than a way to kill time, he was working hard… and having fun, too!

“The only bad thing about Sonic Post Office,” the 3rd grader said in a surprisingly serious voice, “is that it’s closed on Saturday and Sunday.”