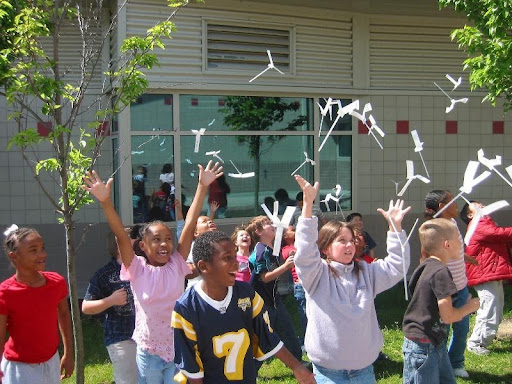 The employees of Winged Wonders thought they were well prepared when the cardboard box carrying their menagerie of butterflies arrived at their New York MicroSociety  Words like “chrysalis”, “pupa”, and “proboscis” rolled over their tongues as smoothly as their own names. They could recite the life stages as quickly as they could recite their own phone numbers. They knew just how to transfer them from box to netted home.

Digging between the enclosed ice packs to release each creature from its plastic packaging, 6th grade manager Ellie, with her facilitator Ms. Morris watching from a safe distance, led her employees in the adoption process.

“I’ve got a yellow one here with black spots. Might be an Eastern Tiger Swallowtail.”

“Can I adopt that one?” asked Vince. “I already have a name and everything. Buzz. Get it? Cause he has the same coloring as a bumblebee.”

“Fill out the paperwork,” replied Ellie, handing over the adoption forms and a sharp pencil for him to get to work on.” Continuing her search and rescue, she declared, “This next little fella is black and white. It’s got to be a Zebra Swallowtail.”

Emma’s hand shot up as she sang out, “I’ll name him Piano and I promise I will take the best care of him…ever.” It was enough to win parental rights, as she too was given her paperwork to start penning.

By the time Ellie had her way with the box, each employee had staked claim on one butterfly. As they filed out of the room for spring break, nobody thought to check the week’s weather report. No one expected that it would go down in the books as one of the hottest April weeks Newburgh had ever seen.

Midway through the week, Ms. Morris got a funny feeling. The kind that speaks to you and tells you to act upon it.  The air seemed unmoving in her home. She worried about the conditions where the butterflies were. Her arrival at school confirmed the worst. Life threatening conditions for the fragile flyers.  Save a few, they had all either perished or suffered wing loss.  Ms. M. felt tears well in her lower lids as she looked at the file box of adoption papers. Loss. Difficult for the most hardened adult but incomprehensible for the child.

When Monday’s Micro Time brought an excited rush of caretaking employees to work, Ellie, wearing a serious expression, requested that they sit in a circle. “Ms. Morris shared some sad news with me this morning and as your manager, I now have to share it with you. But we are only going to be sad for a second. Then we are going to celebrate the cycle of life.” She filled the employees in on the tragedy, skipping details they need not know. “Let’s have a moment of silence for those we lost and count our blessings for the ones that survived.” Holding hands, the employees did just that. And then, they broke the silence with ideas.

“Those of us whose butterflies survived,” suggested Chelsea, “could partner with those who lost butterflies. Two parents will make things easier anyway.”

“When my Poppy died,” said Charlie, “we had a Memorial Service to honor his life. Maybe we could do that for the butterflies.”

“I think we should write to the company we ordered them from,” Victoria urged, “They should place a warning in the box, letting people know that the butterflies can’t be in extreme conditions.”

And so they did.  Each of these things. And along the way a new appreciation for a delicate thing called life took flight.