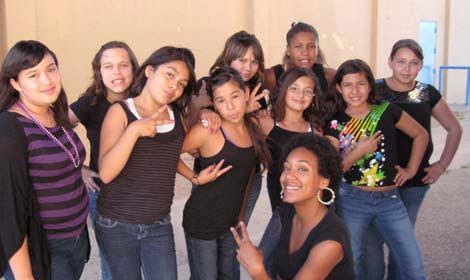 Ariel didn’t know that she was in the market for a new job. It was the sparkle of the sequins and the persuasion of Sasha, a performer with Explosive Expressions, Wilson Middle School MicroSociety’s dance and theatre venture that told her so.

It all started at the café, Ariel and Sasha met there once a week every week during Micro Time. Instead of ordering her usual mid-afternoon snack, Ariel pushed her menu away, eyes cast downward. A break in the routine was all it took to alert Sasha to the fact that something was wrong.

“No granola bar? Spill the beans. What’s going on?”

Ariel gulped. Barely audible, she whispered, “I weighed myself in the Wellness Center today. Chart said my BMI was too high. I’m just plain gross.”

Hands on her hips, Sasha declared, “You stop that kind of talk. You are beautiful. You have curves. You are supposed to. We’re not in elementary school anymore, you know.”

“I’m a cow.” Ariel responded back. “And if I could send these hips back, I would.”

“Hold off on that thought. The Post Office won’t take ’em, but I know a place where you could put them to use.  Why don’t you join Explosive Expressions with me? Hips are a requirement there. If you don’t have hips to swing, you don’t have anything!”

Ariel thought about it. What if she couldn’t learn the routines? What about her job in the bank? What if the sparkly uniform the girls wore didn’t fit her… On the other hand, what if she tried it and liked it?  She might just get some exercise and have fun doing it.

It was worth the chance. But before she had the chance to utter a single word. Sasha had her hand and was towing her to the gym for what she called a “one day trial”.

The moves were fun. The laughs were contagious. The work felt meaningful. The motto of the troupe was Yin and Yang. The poster on the wall read, “Let dancing be the light in the darkness.” It felt true. Ariel knew she looked no different. But somehow, after just ten minutes, she felt different. Lovable. Pretty. Capable.

The routine the girls were practicing told an anti-bullying story through song and dance.  Each girl wore a uniform that she designed on her own.  Ariel had never owned something so fancy before. She envisioned the outfit she would design. She claimed it in her mind’s eye as her own. Working for the bank was an important job – for someone else to take over. She would write a letter and give her notice, in the proper way. Ariel knew where she belonged – in a job where she could shine (and sweat!) – and it was her time.  Sequins or not, she was destined to sparkle.

Putting her hands on her hips, swaying to the beat of the song, she appreciated her body.

“You’re not a cow. But you’ve sure got the moooooves,” giggled Sasha. She was right.