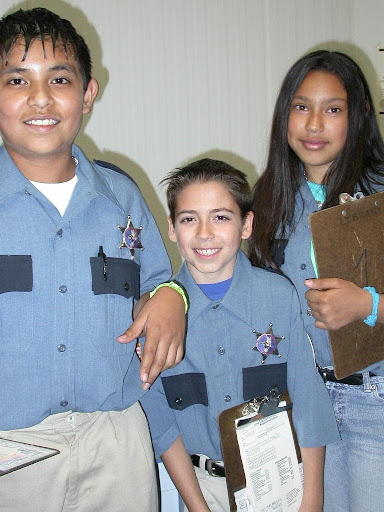 Charging a teacher with theft was a MicroSociety first. And Rex knew he had to be on his “A Game.” Before knocking on the classroom door, the C.G. McDonough City Magnet School 2nd grader straightened his Peace Keeper badge, smoothed his collar, and cleared his throat. He was on official business after all and wanted to seem, well, official.  Before he could raise his closed fist to announce his presence, a pigtailed 3rd grader with eyes like a hawk announced his arrival. “Ms. Medina, there’s an officer at the door.” He liked the ring of that. He was worth stopping for. Being a boy who was on the small side, things didn’t always feel that way.

“I am sorry for interrupting, Ms. Medina, but may I speak with you for a moment–in private,” he added

“What can I do for you today, Officer…” she squinted at this name badge, “Officer Rex.”

“I hate to have to do this to you, Ms. Medina, but we would like to see you in court this Thursday. You are being charged with intellectual property theft.” He handed her the court issued subpoena, neatly rolled into a scroll.

Ms. Medina raised an eyebrow, curious to find out more details about the supposed theft. “Me? Steal?” she questioned.

“Well, that I don’t know for sure–the jury will decide that, but you are being accused of stealing the cubby holes design from Cubby Critters. It was a one-year usage contract. You’re in year two. Devon and Otis say they designed them for sale last year. Since they don’t work there anymore, well, they say you should pay them for their trademark if you want to sell them to your students.

Ms. Medina half-grinned. The boys were right. Devon and Otis had taken the measurements, done the construction, installed the product…and she had wrongly taken credit for THEIR innovation.

“I’m guilty as charged,” she declared, “And as sorry as can be.”

“Sure you are, ma’am, but you can tell that to the judge and jury. Your day in court will come. Thursday. 3 p.m.”

Rex turned towards the door to make his exit. “Good luck. And thank you for your time.” He had served his subpoena and sweet justice. His job was small but important. Kinda like him.