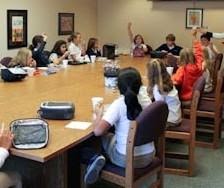 Billy, a wiry 3rd grader had done the unthinkable. After brushing the leftover crumbs from his stained shirt to the floor, he said the word “stupid” to a grown-up. And not just any grown-up. The President and co-founder of MicroSociety. In a business meeting, no less. One would have thought that the air had been let out of the room as the adults sat stock-still, waiting to see what Ms. Richmond would do.

What she didn’t do was react. She just looked Billy square in the eyes, in an I’m-interested-in-you-way and calmly asked, “Can you tell me why you feel that way?”

It had come out in a heated moment. Pulled from the recess line with a half-dozen of his classmates at his West Virginia MicroSociety school, Billy had been directed to the teacher’s lounge. Ms. Richmond had asked for students to be represented there. Adjusting his position in the cushy chair, his principal, teachers, and Ms. Richmond surrounding him, Billy scanned the room and then reached into his pocket for the crumpled paper football he had made. He thought about putting it on the table. The smooth wood would really make it glide. But the start of conversation interrupted that thought.

“I understand that some parents don’t like MicroSociety,” Ms. Richmond had started, looking around the table.

It was true. The protestors were single moms, wives of coal miners, abandoned by heavy drinking husbands or widowed too soon. They had married young and mothered young, leaving little time or place for their own education. They relied on government checks to get by, to put food on the family table, and worried that if their children became too financially literate, they might start to raise questions they didn’t wish to answer.

“From what I understand, they think that this is all about money. What do you think about that?” Ms. Richmond continued delicately.

That’s when it happened. “I say that’s stupid,” Billy declared. “Money doesn’t have anything to do with it.” Ms. Richmond asked him to explain, but he struggled to find words for his thoughts.

“I know what he means,” asserted Danny, who until then had been restlessly pulling the lever to make his chair go up and down. Looking from Ms. Richmond, then back to Billy, he continued,”It’s like when I grow up and have a house and a car and a job, I’m going to remember 4th grade, and what it was like to be part of a community, and have real responsibilities.”

Billy nodded his agreement. “It seems there is more to MicroSociety than money circulating in a marketplace” Ms. Richmond noted, “and children are wiser than we think.”