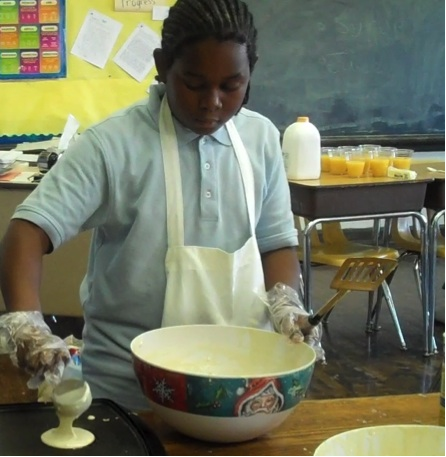 White hat resting comfortably atop his dark braids, Sabian had all the swagger and confidence of an Iron Chef. “To get your pancakes to come out the same size,” he shared his secret “all you have to do is use an ice cream scoop.” Looking at his restaurant patrons, he shrugged his shoulders, then flipped another perfectly round flapjack. “Nothing to it.” Talking and cooking at the same time wasn’t as easy as he thought it would be, but he had yet to burn a pancake in the process.  Turning to his Suez Chef, Ana, Sabian guided, “Plate and garnish this order with berries for Table 3.”

“Makes it healthy,” the sixth grader informed his audience with a nod.

When the Pawsville House of Breakfast first opened at Philadelphia’s Andrew Jackson Elementary back in January, Sabian had made sure that the manager of his MicroSociety restaurant venture was ok with an open restaurant policy. He wanted to be able to interact with his diners and teach them his tricks of the trade. People should see what they were going to eat. Like at home. It didn’t take much convincing for his manager, Sheridan, to agree.

But today, Sabian wasn’t schmoozing with just any diners. He was hosting the Philadelphia City Controller, who was visiting Pawsville for the afternoon, checking out the ventures occupying its Marketplace. “Want to know my secret on getting them to be the perfect golden brown?” he questioned in an effort to showcase his skills. “The bubbles tell you when.”

Sabian had practiced the art of pancakery for the past several weekends in his home, mastering his demonstrations and explanations. He had expected applause and accolades but he hadn’t expected what came out of the city controller’s mouth, “Great skills but I’m diabetic. Do you have any offerings on your menu for diners like me?” All of a sudden, it felt like the griddle had been turned up ten degrees. Sabian’s head started itching, as sweat beaded his brow. He hadn’t thought of that. What kind of chef was he? “Well, to be honest with you, all I can give you right now is a berry bowl. But if you come again, it will be different. You got my word.”

Sticking to that word like maple syrup on griddle cakes, Sabian Googled, scanned cookbooks, and collaborated with his staff to add carb-friendly selections to an expanded menu, complete with nutritional information on each item. Oatmeal pancakes now appeared alongside the traditional ones and agave syrup had a permanent place in the kitchen as a sweetener. Special tastings were held for restaurant employees to sample the newest additions. “No offense or anything,” Ana patted Sabian’s shoulder, “but I think these are even better than your original recipe.” No offense was taken, indicated by what might just have been a wink.

Next up, Sabian planned on developing a gluten-free recipe. It was trending in the food industry. If he wanted to remain a top chef, he would need to stay on top of such things. It was his passion though, so it was a piece of (pan)cake.