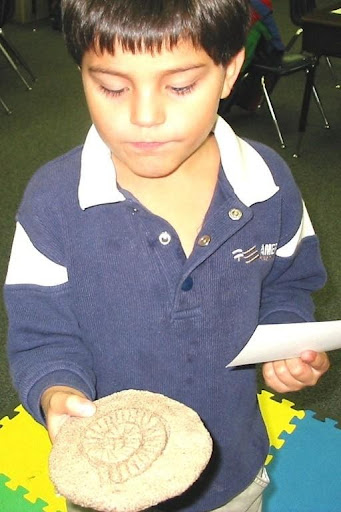 “That’s a really cool thingy, Corey. What is it?” asked Sara. “It’s a paperweight,” he answered. “It’s five dollars.” Sara examined the fascinating seashell, her mind already made up. She seemed to take a special liking to Corey too. Her eyes lit up when he spoke to her. She had no idea he was autistic, or even what that meant. She just liked his invention–and that he was quiet.

Meanwhile, his teacher, Ms. Rimler, watched this sweet interaction from behind the door. “Six words in six seconds!” she counted. Ms. Rimler had vowed to stop her little habit of counting Corey’s words, but always found herself rooting for him. He had come so far, and grown so much since she first met him.

Like most autistic children, 5-year old Corey generally kept to himself. He was into things, not people. Give him blocks, play dough, glue, buttons, sticks, baby food jars, any household item, and Corey could construct aminiature masterpieces out of it. But until recently, Corey had had few engaged interactions with his classmates at Thurgood Marshall, and even fewer during which he displayed the new found confidence and sense of self Ms. Rimler now witnessed.

Changing the subject from business to play, Sara asked him, “Are you goin’ outside for recess?”

Now he has a playmate outside!  That’s just phenomenal, Ms. Rimler thought.

Only two weeks before, Ms. Rimler had a hunch that starting his own business, Corey’s Creations, and moving out of her special ed class and into the student marketplace would really give Corey an opportunity to shine. It would be a big adjustment, but Corey’s excitement about his work, and his keen eye for seeing the extraordinary in the ordinary, had convinced Ms. Rimler that he could handle the responsibility.

Corey had truly begun to come out of his shell. His creations were in demand. He had a place in his MicroSociety, and his work was already giving him a voice he had never had before.

“Ok, see you outside, Corey,” Sara said as she turned to go, her new seashell paperweight in hand.

“See you,” he responded.

In that moment, Ms. Rimler knew Corey had found his niche, not only in the marketplace, but in the larger world of Thurgood Marshall. Corey was an innovator. His changing selection of unique items, from brightly painted book covers to seashell-styled paperweights had already found many happy customers. And if he continued to work hard, his venture would certainly set a new precedent for the special students in her classroom. More importantly, it would help Corey to see himself and his peers in a whole new way, one new customer–and potential friend!–at a time.