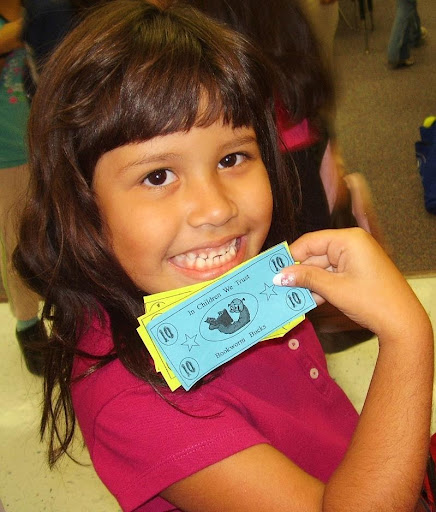 Inspiration can come from the funniest of places. For Sabina, it was raisins. “Ms. DeMarco,” Sabina looked earnestly to her kindergarten teacher, “Do you remember those costumes we used for last month’s play, Heard it Through the Grapevine? Could I rent them from you?”

Before Ms. DeMarco could even reply, out from Sabina’s duct tape wallet came her stack of Micro Money. Counting by 5’s, she presented her bills to her perplexed teacher, “I have 60 Micros, so I figure 5 for each of the raisins, 20 for the bunch of grapes, and 25 for the tractor. Does that sound fair?”

“Can I ask what you are using these for, Bean?” her teacher asked with a playful smile, “That’s a whole lot of money you’re spending.”

Sabina was a thoughtful six-year old. Serious, shy, and deeper in her own head than most kids her age. If she was spending that lump of Micro money, there had to be a valid reason behind it.

“You’ll see,” Sabina nodded. A girl on a mission.

Next stop was to “Rent-a-Helper,” her Seattle MicroSociety’s handyman venture. “I’d like to hire someone to help me in setting up shop. Someone tall. And strong.” She quickly added. Matched with Miguel, a husky 5th grader, they got right to work.

Step one, stringing a large line of twine across the Marketplace space she rented. Step two, shellacking Dad’s old podium with pictures of California vineyards. Step three, pairing Dad and Miguel to carry the podium and that tall swivel mirror from the attic to school and propping up it against the wall. Since she first laid eyes on it, Sabina just knew she had to find a way to use it. Step four, hanging each costume she had rented from Ms. DeMarco neatly by two clothespins. Fun side showing. Step five, signage: “Bean’s Booth – Where YOU are the star. (For Just Five Micros, Please.) And finally, the grand opening.

“Step right up,” Sabina declared through cupped hands. “Try on a costume. See yourself as a raisin, a bunch of grapes, a tractor. Choose your favorite backdrop too! A raisin on the beach. That’s something new!”

The line wrapped down the Marketplace and out into the hallway, farther than anyone had ever seen.  Sabina directed her patrons and caught wind of one saying, “I wish my grandmom could see me as a grape!” She could. Sabina thought. Why not make memories along with experiences?  Maybe I can borrow one of those old Polaroid instant photo cameras from the art teacher.

Whoever had come up with that “kindergarten baby” song was wrong. Kindergartners could do anything given an idea and a flash of inspiration. Pun intended.