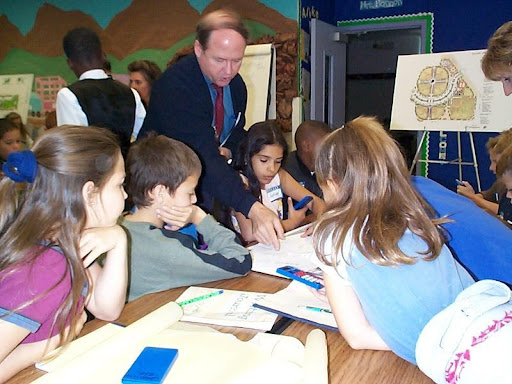 Behind every public park is a story of community. Garehime Heights Park in Las Vegas is no exception.

“We have a broken water fountain here,” reported 10-year old Tyler to the Las Vegas Department of Parks and Recreation, pacing the room, phone on his ear, as he awaited promise of action. Ty was the director of Garehime Heights’ Parks and Recreation Agency, located across the street from the park, inside Garehime MicroSociety Elementary School. “With this heat, having no water is simply unacceptable,” he declared to the person on the other end of the line.

In a presentation given just last week by the Wellness Center, he had learned from 3rd grade manager Kayla, that it only takes a few hours for a kid to dehydrate. They had shaken to the agreement, just minutes ago, that if the department couldn’t fix the water problem in a timely manner, they would join forces to cart bottled water from Vons Grocery Store to make sure all park patrons had their thirst quenched.

Talk about pride of ownership.

Maybe that’s because Garehime kids were involved in the planning of the park every step of the way. Starting with the blueprints. The sharing of a name was no coincidence.

“You’ll be working with our architects and city council to design the park,” announced the Las Vegas mayor at the kick-off assembly. That’s when Ty first knew he needed to interview for the position of agency director. He had tinkered with Legos from his pre-school days. To work with true architects. On a real park. Wow.

With this, the students invited community members to school to get input on their blueprints, including their plan to keep the park in line with their natural desert surroundings, choosing sand over sod and native Nevada vegetation. Little did they know that this design helped the project to come in under budget – the first park in the area to do that! Record breaking.

One more decision. What to name the park?

“I propose, Garehime Heights, after our MicroSociety town,” Ty suggested. The vote of the Garehime Heights citizens, from kindergarten all the way up, was unanimous. But the Las Vegas city council voted a devastating no.So the Parks and Recreation Agency petitioned, making phone calls to area residents stating their case. They collected enough support to overturn the ruling.

Students participated in the groundbreaking of Garehime Heights Park, and the ribbon-cutting on opening day. Each year after, they donned their play clothes for the annual community cleanup.

Today, Garehime Heights Park has two playgrounds, a skate bowl, tennis courts, an exercise path,  coverage for shade- and of course, plenty of fresh water from the water fountains.

Viva Las Vegas and Garehime Park. It’s a shame that what happens in Vegas stays in Vegas!