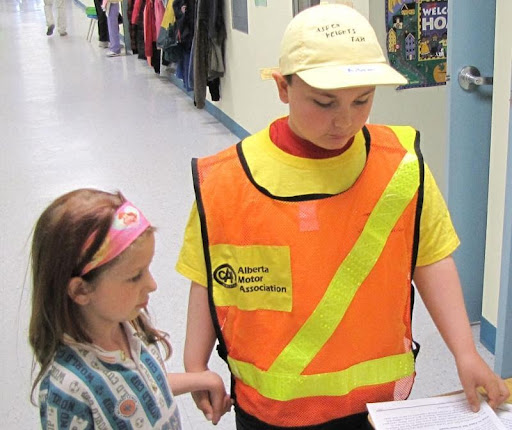 A year ago, neither his teachers nor his mother would have believed that Adam, a 4th grader with autism, could have passed this test.

It started off like any other day, clinging to his trusty map as a guide, “taxi-ing” kindergartners around the Marketplace- all by himself. There was a time when Adam couldn’t be charged with human transports -too overwhelming– bringing goods to and from the warehouse in the wagon was enough. For a long while, Adam needed Bella, his aide, to accompany him on every one of his trips. But he didn’t need Bella anymore. He had his customers. Paying ones! She was halfway down the hall now. He could find his way around the whole Aspen Heights MicroSociety Elementary School like any other kid his age. On his own. He could be trusted with the little kids.

But today, one thing led to another.

First, he lost track of time-very unlike Adam. That’s because he got himself busy helping his customer, Olivia, find a present for her big sister in the student marketplace. When the first announcement from the Buzz radio station came, signaling that dismissal time was approaching, he quickly clutched Olivia by the hand, taking hold of her packages in his free one. Adam turned his usual corner to head back, but traffic was backed up! And a huge crowd of big kids were gathered in line for the gigantic 50% off sale that the Moose on the Loose venture was hosting.

The watch strapped on Adam’s wrist continued to tick. He glanced down long enough to read the time. 1:55. He needed to have Olivia back at her classroom by 2:00. The kindergartners were dismissed earlier than the rest of the kids. Soon the radio station would make its second announcement. Her parents would be waiting with the others in the long carline to take her home. A late return was enough to necessitate a “talking to” by his manager. Even though he understood that mistakes happen, Adam just didn’t want one to happen today. He had come so far in his career. He didn’t want any setbacks threatening that.

Olivia started to whimper. “I have to go to the bathroom.”

“It’s ok, Olivia,” Adam said in his calm, but slightly- too- loud- voice. I will take care of you.” He thought of what his manager always warned… “Don’t be late”. But no rule was unbendable. When you’ve got to go, you’ve got to go. 2:02 would just have to do this time.

Adam stopped a 4th grade Peace Keeper, Owen, who was making his rounds. “Officer, I have a favor to ask. Olivia, here, needs to use the bathroom, and I am afraid I will have her back to her classroom a minute or two late.”

“No worry,” said Owen, “I will let her teacher know and then come back to escort you to her class.”

Phew! Pulling up alongside the girls’ room, “Pit stop!” Adam declared. He released Olivia’s sticky hand as she hustled towards the door. “Thanks, Driver,” Olivia said over her shoulder, “Just in time!”

Well he wasn’t just in time for dismissal, but he was in just enough time to narrowly escape catastrophe. A hallway puddle. Tomorrow would be another day on the roads. All in a day’s work.