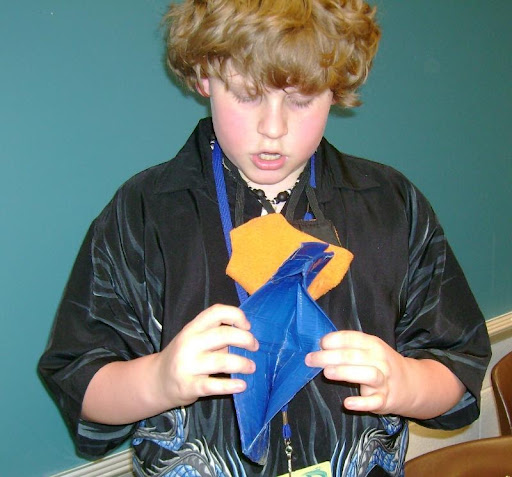 “You need to go to the manager or owner with that. I am an employee, just like you,” said the duct tape wallet maker. He wished everyone would stop coming to him with questions. But then again, he was the biggest, oldest, coolest, and by far, the most overqualified employee in the entire MicroSociety village. He was Mr. Sternberg, the principal of Imagine South Vero MicroSociety school.  How on Earth did that happen?

The deal went down at the Parent Open House.

James, the owner of J’s wallets burst into Mr. Sternberg’s office, “You need money, don’t you?” Baffled, but intrigued, he matched his swagger. “Yeah, I need Micro money!”

“Well, why don’t you get a job?”  You can work for me!” James was already calculating huge profits in his head. A straight-A student whose thoughts moved quicker than a major league pitch, James quickly developed a sharp business sense. He studied the MicroSociety “game” astutely and he played to win.

Mr. Sternberg mused. This kid was serious. But what in the Micro world was he going to do?  “Listen, I know you don’t have any experience making wallets, so I’ll train you,” said James.  “Ok,” said Mr. Sternberg, “but I can only work on Fridays, after 2 p.m. and only on days when I don’t have a board meeting scheduled.”  James wasn’t quite sure he liked the idea of his employee determining his work schedule.  But if this was what it would take, then he’d shake. Deal.

Right away shoppers lined up, but not to buy more wallets necessarily, at least not at first. They had to catch a glimpse of Mr. Sternberg hunched over a kid desk and chair, with duct tape! Soon, James developed  a strategy. “My investors (mom and dad) and I went to Dick’s Sporting Goods last week, and I noticed that the autographed baseball gloves were almost out of stock. So how about you sign these wallets, Mr. Sternberg? Then I’ll sell them at a higher price and make big profits.”

The results? Profits rose sharply. But it was hard to tell which ultimately got the bigger boost, sales or Mr. Sternberg’s ego.