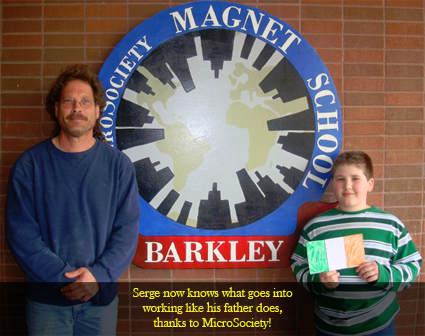 “This June, I’m going to buy this business from my teacher,” Serge proudly informed the school board member at Bring Your Parent to Work Night, Barkley MicroSociety Magnet School’s annual fundraiser.  He glanced over at his father to see if he was listening, as he hatched his master plan.

A year ago, networking wasn’t in his vocabulary, or his character.  He wouldn’t have known how to talk shop with the big guys.  But working in the travel industry changed that.

A month ago, Serge hadn’t planned on owning his own venture. Now he was saving every dollar he earned at Pawsville Travel Agency, his classroom business, so he could be his own boss.

Raised by a single dad, the oldest of three boys, Serge was used to taking on responsibility and taking initiative. Yet at school, he used to be shy, almost intimidated by his peers, his teachers agreed. The problem was a confidence one.  He didn’t know what his talents were nor his interests. Public speaking… doubtful. He rarely spoke up in class. The arts and crafts type?  Nah.  You wouldn’t find his work displayed in the showcase by the principal’s office. The culinary arts? The one time he tried cooking, he melted the plastic spoon…

Then he discovered geography.

“We give virtual tours of a different country on the Smart Board,” he explained to the school board member.  “I present and put clip art into the PowerPoint. Usually I go to the school library or Wikipedia for info.”

“That’s impressive,” replied the board member. “Think I’ll head to your post office station and write you a postcard from one of your destinations.”

That’s funny, Serge thought. It seemed like he instantly believed in him. Like he’d seen him differently than his peers did, even his teachers. Almost like…an equal.

In that instance – that exchange, Serge knew what his talent was.  He was a salesman.  He had sold himself and his business to a complete stranger.

He would soon be a proud owner of a small business too, once he could secure a start-up loan to make the agency his.