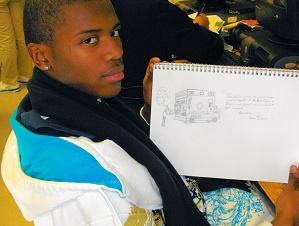 Yevan Turner used to doodle all over his wooden desk in black Sharpie.

He stayed after school to scrub it off, more times than he could count on his two hands.

Now, he sits in a corner office.

Well, the corner of his classroom to be exact.

he packaging of fast food items.  All the while he’s thinking about his loyal audience of 4th-8th

graders and the next issue of “Clark Barker”, the venture he works for in his MicroSociety School.

So far, President Obama, First Lady, Michelle, and a bunch of pig-tailed, gap-toothed kids with

Happy Meals are sitting in a booth, squinting at their burger wrappers.  “Mine has more!” reads

Yevan writes furiously with his chewed-up pencil, so small, it’s hard to believe it still has lead.

Then looks around to see if anyone saw him do that.  Image matters in the 8th grade.

He leafs through a stack of newspapers: USA Today, New York Times, The Record.  He rereads and highlights his writing on healthcare reform and the latest version of the iPad.

Then he stops. He has a deadline to meet and his editor is tough.

He kinda likes the pressure though.  The intensity.

craft into his own work.  She brought him stacks of periodicals and showed him that the kind of

work he was doing had a name.

He liked the sophisticated sound of that. Commentary.

Yevan used to doodle all over his desk.  That was then.